The top admiral overseeing all forward-deployed forces in the Pacific — from North Korea to New Zealand — is working to convince Congress that stronger IT platforms are key to winning future fights in the region.

One of the programs Adm. Philip Davidson, commanding general of the Indo-Pacific Command, wants Congress to continue to fund is the Mission Partner Environment (MPE), which allows partner nations to link into U.S. military systems and communications. Davidson said the platform is critical in deterring the military’s top strategic competitor China as it allows the U.S. to work more closely with allied nations.

Davidson’s argument — which he presented during a pair of hearings this week before the House and Senate Armed Services committees — is that the U.S.’s strongest asset in the region is its partnership with allies. To further deepen those ties, the military needs to link communications and tactical data networks with those friendly countries, he’s said while making rounds on the Hill in the early days of this month.

Lawmakers appeared receptive to boosting funding for Pacific operations and tech being a part of that.

The environment would be funded in part through the Pacific Deterrence Initiative (PDI), a larger $27 billion request over the next six years. The PDI is a specific pool of money authorized by Congress to fund troop deployments and other deterrence-related activities in the Pacific. It’s modeled after the European Deterrence Initiative, created to counter Russian aggression in Europe in 2014.  Davidson described the broad strokes of the PDI in the open part of the hearings but saved intimate details for a closed, classified briefing with lawmakers.

While in fiscal 2021 MPE specifically got $50 million in funding, it’s unclear what Davidson wants for the program in the years to come.

MPE is already available and in use by some high-level officers, but Davidson wants to expand that.

“My key objective…is to pursue the MPE,” he told senators of strengthening alliances.

Former DOD Chief Information Officer Dana Deasy told reporters in July that the MPE was a key priority of the CIO’s office as well. But, he estimated that the cloud-based system wouldn’t be in widespread use until 2028.

“This is the next generation of how we fight and communicate with our allied partners,” Deasy said.

The military is currently in its own internal battle to link data from the different services and domains. Trying to link tech from different countries may prove even more challenging as it will need to not only bridge languages but ensure interoperability with equipment built by other militaries.

“Interoperability is at the very core of our Republic of Korea-U.S. military alliance, and it has been that way for decades,” Gen. Robert Abrams, commander of U.S. forces in Korea, told the House Armed Services Committee during a hearing Wednesday. 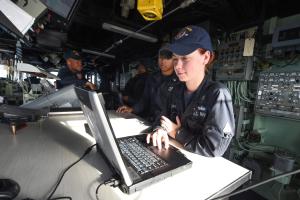