The Navy’s new education strategy calls for increasing the familiarity with emerging technologies at all levels of the service.

On top of that, much of the strategy itself will rely on the use of technology, via online and long-distance learning for the future of the Navy’s education.

The Navy wants to increase the cyber and technical knowledge of sailors and Marines, acknowledging that cybersecurity has been a critical vulnerability and emerging technology is changing the way the service will fight in the future. Increasing this technical knowledge will mostly take place through online classes, according to the strategy released Monday.

The strategy sets broad goals and objectives for all tiers of the Navy’s education system. The first action item calls for the creation of the Naval Community College available to all uniformed members of the department.

The college will not be housed in any one location, but instead allow for a unified transcript for all sailors and Marines where they can account for the military training and civilian courses they take at partnering schools. IT, cybersecurity and other technical skills will be a priority for the courses offered in the community college program, according to the strategy. Chief Learning Officer John Kroger gave a preview of those plans in January.

For mid-career officers, the Navy wants to provide more refresher courses on warfare and increase the number of officers at the Naval War College. Currently, the Army has better enrollment numbers at the college — a wound to the pride of acting Secretary Thomas Modly, a former naval officer.

“We have more Army officers in the Naval War College than [Navy officers],” Modly said Friday during an event at The Brookings Institute. “Think about how that hurts me. Right?”

Modernizing online education is another objective. The strategy initiates a study of how the War College could reach students differently, such as using online portals.

“Using these new methods will help us provide quality education while minimizing disruption to career paths and reducing personnel transfers,” the strategy states.

The Navy also has “gaps in knowledge about the value and limitations of emerging technologies and potential adversary capabilities and intentions,” the strategy states.

Working groups will develop curriculum for different levels of the Navy on topics such as the tech capabilities, culture and intentions of U.S. adversaries. Priorities for emerging technology education are leadership and ethics, as well as resource management and acquisitions, the strategy states.

“My experience in the private sector is … organizations that can learn quickly and adapt quickly are the ones that are going to survive,” Modly said, who worked at PricewaterhouseCoopers before joining Navy leadership.

For high-performing civilian leaders, the chief learning officer (CLO) is developing programs to send them to prestigious universities for executive programs. Previously, CLO John Kroger said he is working with Harvard on executive programs on data science. The strategy states programs will aim to lead to a master’s degree in management. 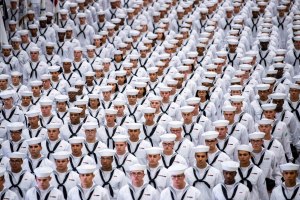