The Navy’s work to modernize and increase its cyber-readiness continues despite the resignation of acting Secretary Thomas Modly, who was instrumental in elevating the CIO role and prioritizing modernization and cybersecurity across the service.

Modly resigned from his secretary role Tuesday after he faced public criticism for ousting the commanding officer of an aircraft carrier who had raised concerns about the Navy’s handling of a coronavirus outbreak on his ship. The now-former secretary then went on to insult the fired commander, Capt. Brett Crozier, in a speech through the USS Theodore Roosevelt’s loudspeakers. Modly acknowledged mishandling the situation in his letter of resignation.

Though Modly will likely be remembered for his action around the USS Theodore Roosevelt and treatment of Capt. Crozier, he was one of the Navy’s biggest advocates for IT modernization in recent years, even serving for a time as its CIO in his role as the undersecretary.

More recently during his tenure of Navy leadership, he helped launch an IT modernization strategy, which CIO Aaron Weis says remains “on course.”

Modly worked to reform the Navy after a blistering review laid bare the service’s cybersecurity lapses. In response, he made updating the legacy technology that the service runs on one of his top priorities — calling the Navy’s backend support systems “grey zones.”

“I foresee no changes in the direction or strategy regarding my role as Department of the Navy Chief Information Officer,” Weis said in an emailed statement to FedScoop. “We are continuing to work the path outlined by Secretary Spencer in 2019 and followed through by Secretary Modly.”

In a memo detailing his vision for Navy tech modernization, Modly wrote that “success in traditional warfighting domains now requires mastering the Information Environment.” He later said that while typing up that memo his computer crashed.

Modly was also integral in elevating the CIO position to meet tech challenges in the Navy and support its modernization. Modly created the enhanced position last August while serving as undersecretary and also fulfilling the duties of CIO. He hired Weis to be the first CIO in that more powerful role.

“We will continue our work to Modernize, Innovate, and Defend the [Department of the Navy]’s information and networks…I am looking forward to working with future DON leadership to make the vision ‘to build information superiority to win the global naval fight’ a reality,” Weis said of the department, which also houses the Marine Corps.

Modly has been replaced by acting Undersecretary of the Army James McPherson, who will take over until a permanent Navy secretary is confirmed by the Senate.

The Navy’s leadership has seen high turnover recently with the removal of former-Secretary Richard Spencer in November and now Modly’s resignation Tuesday. It also comes as the Navy faces the unprecedented challenge of teleworking during the novel coronavirus pandemic. 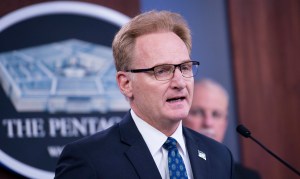