In its fiscal 2022 discretionary funding request on Friday, the White House asked Congress for an additional $500 million for the Technology Modernization Fund, citing agencies’ need to update and secure antiquated information systems.

That’s on top of a $110 million increase, to $2.1 billion, requested for the Cybersecurity and Infrastructure Security Agency and $750 million requested as a reserve for agencies’ IT enhancements.

The American Rescue Plan Act saw a record $1 billion injected into the TMF and $650 million appropriated to CISA in March, but countering the cybersecurity threats posed by China and Russia remains a priority for the Biden administration.

The General Services Administration will play a central role in managing the TMF and other governmentwide funding for IT modernization.

“These funds will allow GSA to support the administration’s efforts to tackle the climate crisis, promote economic opportunity and strengthen federal cybersecurity,” Acting Administrator Katy Kale said in a statement. “These critical investments will enhance support to federal agencies and the public, while making our nation’s infrastructure more secure and sustainable.”

GSA‘s emphasis will be on mission-critical systems and citizen-facing digital services in light of the COVID-19 pandemic and the SolarWinds hack that compromised products agencies use, according to the request.

The proposed increase for CISA would go toward enhanced cyber tools, hiring and support services. Another $20 million would be for a new Cyber Response and Recovery Fund.

Within the Department of Commerce, the White House asked for $916 million — a $128 million increase — in funding for the National Institute of Standards and Technology. That money would expand NIST’s research into computing, cybersecurity, artificial intelligence and quantum information science (QIS). Another $39 million was requested for spectrum sharing research benefitting broadband and 5G deployment.

“NSF stands ready to maximize the impact of this increase in funding and tackle critical challenges to bolster the U.S. economy and our leadership in critical and emerging areas of research and technological advancements,” said an agency spokesperson in a statement.

“This year’s appropriations process comes at a particularly important moment,” said one administration official on a call with reporters. “Where the past decade, due to overly restrictive budget caps, our country has underinvested in core public services, benefits and protections that are incredibly important to our success.” 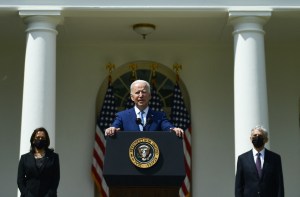