The Air Force transitioned a squadron that once focused solely on communications into a unit dedicated to cyberdefense, the latest tactical pivot that mirrors the department’s broader changes to modernize its force.

The 55th Communications Squadron transitioned into the 55th Cyber Squadron in September, according to the Air Force. It’s the most recent squadron — the basic unit of the Air Force that can contain a few dozen to more than a hundred airmen — to transition from serving in a network or communications role to a cyberdefense.

What the change in mission means for the squadron is that it now conducts cyber defensive operations, not just the maintenance of IT and communications infrastructure of aircraft.

Other squadrons and teams have made similar transitions in recent years as the Air Force works to protect its platforms from cyberattacks and operate more in cyberspace.

“We had to put in place so many new processes and procedures and completely change the way we do business, not just within the team but within our entire squadron,” said 2nd Lt. Jeffrey Cruse, a cyberdefense flight commander with the squadron. “As for the operators, once things got moving along they were fully bought in and onboard. They had been working and waiting for so long to finally get connected to a system and apply their skills. Once we were able to make our first connection, it was game on for them.”

Out of the roughly 300 squadrons in the Air Force, a handful of others have made a similar transition to focusing on cyber since the signing of Cyber Squadron Initiative Program Action Directive in May 2020. But the 55th Cyber Squadron’s change comes as new Air Force Secretary Frank Kendall placed new emphasis on modernizing to compete with China.

“Our strategic competition is as much about intellectual capacity in critical technologies, engineering expertise, and the application of cutting edge cybersecurity technology as it is about flying skills and tactics,” Kendall said in September at the Air, Space and Cyber conference.

How the squad pulled it off

Staffing cyber positions has been a challenge across the military. For the new cyber unit, the key to success was a “robust” training program outlined at the onset of the transition.

The Air Force, and the new Space Force that sits within the Department of the Air Force, have placed training at the center of strategies to improve cybersecurity skills. The Air Force launched a “Digital University” with thousands of courses on technical issues to enhance the acumen across the force. And for guardians coming into the Space Force, some of those courses are required, depending on their specialization.

“The unit focused heavily on building a robust operations training program early on in the process and that paid off in the end,” the squadron said. 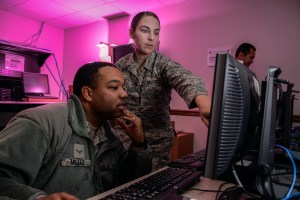 The Air Force remakes a squadron into a cyber-focused unit