The U.S. military isn’t properly balanced to fight modern conflicts, and lawmakers will be pushing the Pentagon to modernize faster, the chairman of the House Armed Services Committee said Wednesday.

Unmanned systems are an example of a capability that the Department of Defense needs more of, said Rep. Adam Smith, D-Wash.

“We need to … modernize our approach to warfare technology. It’s all about information and survivability now. I mean, tanks are not as useful as they used to be. Drones are a lot more useful. Why do we have more tanks than drones?” he said.

Unmanned aerial systems (UAS) have been one of the most effective tools for Ukrainian forces fighting Russian invaders, Smith noted.

The United States and other NATO countries have been supplying Ukraine with a variety of weapons including anti-aircraft systems, anti-armor missiles and tactical drones. UAS are especially critical, he asserted.

“Above all else, to me what is so crucial is drones because … the destruction being rained down upon those [Ukrainian] cities, it’s being rained down some by standoff weapons, but primarily by artillery. The only way to effectively target artillery right now is through missiles,” Smith said.

The Ukrainians have had success employing the systems, he noted.

He continued: “Drones have the ability to get out there and not be seen. They’re survivable, they won’t get shot down and they can deliver a punch. So those are the systems that we have to get to them … as fast as we can.”

Meanwhile, NATO is sending additional forces to Eastern Europe and plans to beef up its defenses to try to deter Russia from attacking the alliance.

The DOD and its allies need to improve the survivability of their forces and how they leverage information, he suggested.

HASC members will be pushing for faster modernization, he noted.

“I’m very frustrated by a number of things. The Pentagon is not innovating as fast as they need to. We’re gonna keep putting pressure on them to try to get that done,” he said.

On Monday, the Biden administration released its fiscal 2023 budget request, which included funding for a variety of drones and other unmanned systems, among other modernization priorities.

The White House is asking for $773 billion for the Pentagon in the next fiscal year, $130.1 billion of which would go toward research, development, test and evaluation accounts — the highest-ever level of RDT&E spending in DOD history, according to the Pentagon. That would be a 9.5% boost in RDT&E spending over the amount enacted for 2022.

Speaking at the conference Wednesday, Rep. Mike Rogers, R-Ala., the top Republican on the HASC, said he and other lawmakers will be pushing to authorize military modernization spending levels well above what the White House requested. 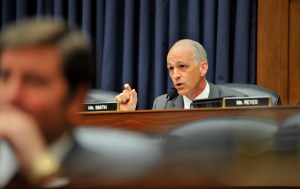