As the Air Force‘s top technology and acquisition official departs the Pentagon at the end of the Trump administration, he’s leaving with a final message: Stay agile or lose to China.

Will Roper, the assistant secretary of acquisition, technology and logistics, expects to move on soon, given that he’s a presidential appointee and the incoming Biden administration has not clarified his fate at the DOD. His more than two years in the role saw many changes, like the creation of Pitch Days, AFventures and other programs, but the one he said he is most proud of is the cultural shift to be more agile and technology-driven force.

Those changes are important, Roper says, because warfighting is now a world of data, IT and agility where winners and losers will be determined by who leans harder into tech.

“You have to be ready for disruption,” Roper said in closing a one-on-one interview Thursday with FedScoop after his final press round table.

And with that in mind, “the role of the service acquisition executive is now different,” he said as the interview wrapped up. “There has to be different people for at least a period of time.”

What he means is that for now, acquisition chiefs should be more like him, with deep technology expertise that extends to modern software development. Just being an expert in contracting or procurement isn’t enough, Roper said.

The need for change is driven by the new form of great power competition between the U.S. and China — an adversary Roper said will always draw his attention, whether he’s working inside or outside of government.

The list of important topics, Roper said, includes software development, cloud, Kubernetes technology and other software development processes. He said he drew on his experience in those areas daily to carry out his duties as the top buyer for the Air Force and Space Force.

Roper also pointed to specific programs that he believes should remain a priority in the next administration:

One of the programs that needs disruption and a continued drive for innovation, he said, is the Advanced Battle Management System. The family of systems is the Air Force’s technical contribution to the Joint All Domain Command and Control (JADC2) concept where all networks are linked, data is ubiquitously shared and a military internet of things could be controlled by iPad-wielding generals.

Roper has been one of the program’s biggest boosters. He has evangelized it in press conferences, webinars and before a skeptical Congress. One of his last meetings will be with the Rapid Capability Office, the group that he recently designated to be the program executive for ABMS.

“I have given them a recipe and done a lot of sous chef-ing,” he said of the hand off.

The creation of an acquisition strategy was one of the program’s sticking points on Capitol Hill. Congress was unwilling to give the program its multi-hundred-million-dollar request because lawmakers say it lacked strategy. The Government Accountability Office had dinged the program for the same reason. But Roper insisted in his interview with FedScoop that the timing was right and the program’s overall development was inline with the agile processes he wants the DOD to continue once he is gone.

“If we had tried to do this a year ago, everything would have been fictitious,” he said of designating the RCO as PEO and finalizing the strategy on his way out the door. ABMS has been developed through a series of events that aimed to test the whole eco-system of technology, instead of having a piece-by-piece approach where parts of the system are procured and then scaled up. The last major test event Roper oversaw in September was the “birth” of the military internet of things, he said.

“I think we made the pivot at the right time,” he said.

IT as a warfighting system

Another one of Roper’s main phrases he liked to repeat was the need to consider IT as an integral part of warfighting. ABMS runs on IT, he said, and so should the rest of the future of military systems.

“IT and connectivity may be the most important thing” to sustain, he said. Much of the funding of technology competition has been poured into research and development dollars, an important step but not the full-picture, he added.

To continue to recruit young airmen and to sustain advancing technologies, dollars needed to be allocated to not only developing new technology but also to investments in back-end systems, he said.

“Buying the lowest-price technically-acceptable solutions, a tech company would never do that,” he said. Implicit in that: neither should the Air Force. 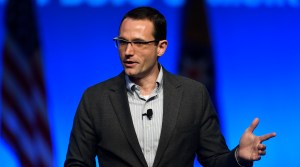 Will Roper to whoever replaces him at Air Force: Stay agile