Scott Blackburn, acting CIO of the Department of Veterans Affairs, resigned from the department Tuesday.

Blackburn came to the VA as an interim deputy secretary during the Obama administration before being named acting CIO when his acting predecessor Rob Thomas left the department in September 2017. The VA hasn’t had a permanent CIO since LaVerne Council, who resigned with the change in administrations in January 2017.

Blackburn announced his resignation in a tweet with an accompanying letter calling his work with VA “the honor of my life.” An Army veteran himself, Blackburn wrote, “I came to Washington because I wanted to make a difference; and I am very proud of what we have accomplished.”

This is a bittersweet moment in my career. Today I officially resigned my position at @DeptVetAffairs. It has been the honor of my life. Too many people to thank. Will continue to advocate for #Veterans in other ways. Next stop – time off for a few months 🙂 pic.twitter.com/qN9HWWocjn

Blackburn’s departure comes weeks after David Shulkin was removed as VA secretary. They both played primary role in the department’s efforts to acquire a modernized, commercial electronic health record. And despite making progress in announcing the decision to adopt a Cerner-based off-the-shelf EHR that interoperates with the Defense Department’s new platform, the department has yet to strike a contract with Cerner. Their departures could complicate things further.

In his tweet, Blackburn said he will continue to advocate for veterans and plans to take the next few months off from work. 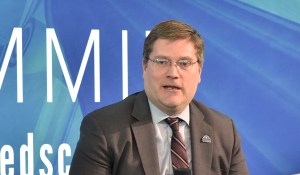