The U.S. Air and Space Forces will once again allow security researchers to penetrate some of their most precious assets: satellites.

During last year’s first Hack-a-Sat bug bounty initiative, the Air Force opened a satellite to more than 6,000 white hat security researchers to see if they could break-in, in turn helping the Air Force to learn about its vulnerabilities.

This year’s contest will follow much of the same format as last year’s hosted at DEF CON 2020. and aims to attract even more participants to test the security of satellites. Registration is now open for the qualification round which includes a new “Jeopardy-style format” with hackers being able to earn points based on speed and accuracy of solving problem sets.

“The security and cyber-resiliency of our on-orbit systems is an absolute necessity as we look to ensure the peaceful development of the global commons of space over the coming decades,” Lt. Gen. John Thompson, commander of the Space Force’s Space and Missile Systems Center, said in a release. “This required a multitude of specialties, so partnerships across the entire professional cybersecurity spectrum are vital to developing the next-generation of secure space systems.”

The initiative extends on the Air Force’s work to build stronger connections across the hacker community, which once was suspicious of working with the military and federal government.

“Working with the Air Force on this was awesome because it’s not every day you get access to this kind of technology to mess around with,” Cyrus Malekpour, a winning team member for last year’s Hack-a-Sat, told FedScoop at the time.

The top three finishing teams that make it through the qualifying rounds are eligible for $50,000, $30,000 and $20,000 for first, second and third place, respectively. Will Roper, the Air Force’s former head of acquisition, technology and logistics, said he wanted hackers to be able to “make a living” off bug bounty programs like this. 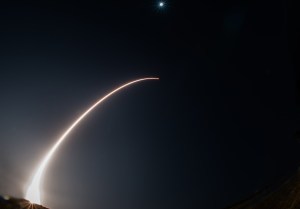