Federal Chief Information Officer Suzette Kent announced last week she is leaving government in July, making this the third such announcement in June — nearly four months away from the November election and the start of a potential presidential transition.

Cheriyan, who also serves as Federal Acquisition Service deputy commissioner, is headed to the private sector July 17. Cheriyan joined the General Services Administration in January 2019. With CoE Executive Director Bob DeLuca, he oversaw the expansion of that trademark program from two to 12 agencies, even amid the current coronavirus pandemic.

“Anil has done a tremendous job leading TTS, and I am very grateful for all he and his team have accomplished during the past 18 months,” said GSA Administrator Emily Murphy in the announcement. “Under his leadership, the Centers of Excellence program has grown to twelve agencies, and GSA has had the opportunity to be involved in multiple governmentwide initiatives that have positively supported the federal government’s COVID-19 response.”

DeLuca will join the Federal Deposit Insurance Corp. as deputy CIO in July.

New CoE partnership announcements are “in the works,” and until DeLuca’s replacement is named, TTS Assistant Commissioner of Clients and Markets Harry Lee will lead the program.

Cheriyan helped TTS “sharpen its vision, strategy and focus on the key elements vital to the future of federal IT modernization,” said FAS Commissioner Julie Dunne.

He thanked TTS employees in his announcement.

“I have been constantly impressed by the quality of the TTS team, and it has been a privilege to work with each of our team members,” Cheriyan said. “They are immensely talented and driven public servants, who are committed to transforming and improving the public’s experience with government through technology.” 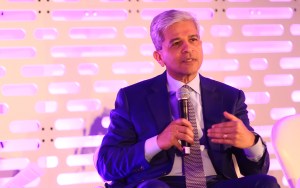