Amid the Army’s push to modernize through its Futures Command, the service is also actively recruiting cybersecurity personnel with a cadre of recruitment and incentive strategies.

Senior Army cyber leaders, speaking at the Association of the United States Army’s annual conference this week, said the future of the service heavily depended on cross-functional collaboration of cyber resources into a “team of teams” model. The service also requires a direct infusion of new talent into its ranks, they said.

“Sometimes we get wrapped around the technology and think that as long as we come up with the next tool or the next piece of technology, it’s going to make us successful. At the end of the day, it’s people that are going to make us successful,” Brig. Gen. Richard Angle, deputy commanding general of operations at Army Cyber Command, said Monday. “So we’re in the process of developing a holistic talent management strategy on how to recruit, assess, select, train, educate, develop and retain a world-class workforce.”

Among those strategies currently underway, Angle said, is an ongoing direct hire authority program called the Cyber Direct Commissioning Program, which allows it to bring in cybersecurity professionals from the civilian space and immediately commission them as officers.

The pilot program recently commissioned two lieutenants in May and officials said Monday they are looking for their first cyber colonel for the program.

Angle added that in addition to the direct hire authority, the Army can provide cyber professionals with both crucial experience and a purposeful mission.

“You are going to get experiences serving in the U.S. Army Cyber Command that you are not going to get anywhere else,” he said.

But Army officials are also looking to expand other digital capabilities, particularly in the realm of electronic warfare (EW), and are looking to scale up new talent capabilities at the tactical level.

“Right now, we are focused on the growth and acceleration of bringing cyber to the tactical edge,” said Brig. Gen. Jennifer Buckner, director of cyber, G-3/5/7 Directorate. “When I say, ‘bringing cyber,’ I mean that in its most expansive view. Bringing all of these capabilities — cyber, electronic warfare and information operations — to the lowest tactical echelon.”

But while Army officials said they believed they had the hiring authorities needed to allow them to onboard new talent, they could face the same challenges that the private and public sectors have in securing talent.

Maj. Gen. Garrett Yee, acting deputy CIO, G-6, said the advantage the Army has that those sectors may not is a nimble workforce of digital natives that it can train up.

“On the military side, we bring in 18 to 23-year-olds. They are always fresh, always coming in,” he said. “The new soldiers coming into the Army learn more naturally digitally than hands-on.”

But where the Army does have some trouble, he said, is bringing in seasoned cybersecurity professionals, which is where programs like the direct commissioning pilot come in. They can provide hiring incentives and flexibilities not normally provided — such as removing the retirement-age requirement — to secure those professionals, Yee said.

“The idea is to streamline some of that process to bring in civilians a little quicker. Because I think we have all experienced the wait process, the slow process to bring someone in,” he said. “So part of the challenge is timely hiring, and you will see an emphasis from [the Office of the Secretary of Defense] down to the services to try to shorten that hiring timeline for all civil service. But with the cyber accepted workforce, we have the ability to direct hire, which is a much more accelerated process for us.” 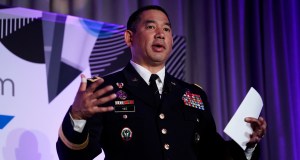 Army officials are on the hunt for more cyber talent