The Army’s recent initiatives to modernize its networks over the next decade are not moving quickly enough, and it’s time to explore a better option, CIO Bruce Crawford said Tuesday.

The Army will take a page out of the books of the Navy and Air Force in adopting an Enterprise IT-as-a-service model, coupled with a renewed push to the cloud, Crawford, a three-star general, announced at an AUSA breakfast. “We needed a hard right turn, we needed to do something fundamentally different.”

In an IT-as-a-Service model, an entity outsources certain IT functions to another. In the Army’s case, Crawford said, it plans to enlist commercial providers for network infrastructure development, network services and devices, starting with its focus “mostly on the network.”

“The Army’s enterprise network at its current level of investment and current pace of modernization cannot meet the immediate and future warfighting requirements to optimize force readiness,” he said, pointing to the incremental modernization approach his office has taken in recent years.

But the service just has too much “expensive” legacy IT on its hands to take that approach — “the vast majority of our infrastructure is at or nearing end of life, somewhere around 70 percent,” Crawford said. “We concluded that the current path would take beyond the year 2030 if we stayed on the current path to modernize the enterprise.”

After talking to the Navy and Air Force, and “visiting those in commercial and defense industry who have been competitive in this space for some time,” he said, “we came together and decided that a fundamentally different approach was needed.”

Now, under the IT-as-a-Service model, Crawford said, the Army will “move from an incremental approach at 288 different posts, camps and stations to more of a prioritized approach at about 50 of our most important and significant readiness-related, power-projection platforms.” Over the next year or two, the Army will start experimenting with “exploring options that involve the various as-a-service models provided by commercial and defense industry,” he said, pointing to the Navy and Air Force models that precede it as “great work” the service is studying.

The Army will kick off three enterprise-as-a-service pilots in fiscal 2019, the first with the Army Futures Command in Austin. The next year, it will launch several more at “the most critical posts, camps and stations where readiness is being generated around the Army,” Crawford said.

Army’s plan for the cloud

In a separate but similar effort, the Army is looking to expand its cloud portfolio by preparing for and taking advantage of the work underway in the Department of Defense’s Office of the CIO to develop an enterprise cloud, namely the Joint Enterprise Defense Infrastructure (JEDI) cloud.

“The Army remains in-sync with the DOD’s enterprise cloud efforts,” Crawford explained. “Our near-term focus is posturing ourselves to leverage general-purpose and fit-for-purpose cloud hosting capabilities,” following the direction of the DOD Cloud Strategy. The Army last released its own cloud strategy in 2015. “So there are some things we’ve got to do in the Army to set conditions to be able to properly leverage cloud hosting capabilities.”

The service is standing up a cloud program office, likely to be launched in the next 90 days. On top of that, Crawford said, “expect to see two contracts intended to provide the managed services required to get us to the cloud and the common shared services that are going to be required to sustain the Army once we’re in the cloud.” The Army will also launch several cloud “pathfinders” — a sort of exploratory contract, as the name suggests — “focused on tactical intelligence data, financial management applications, global force integration systems, logistics and maintenance, and the tactical server infrastructure.”

That strategy was informed by the Army’s meetings with organizations from both commercial industry and government to guide its cloud efforts, including Netflix and Airbnb. Crawford said the best feedback he received from that market research was to “start small — focus your cloud efforts on specific Army problems while you learn and build the capacity as an institution to migrate the Army to the cloud.”

As for DOD’s JEDI and enterprise cloud strategy, Crawford said the Army is “100 percent in-sync with where [DOD CIO Dana Deasy] wants to take us in terms of his DOD cloud effort.”

“There are some things we’ve got to do to set conditions for that beyond the discussion about the data strategy — putting managed services in place that are required to move us to the cloud and then thinking forward of what’s going to be required when it comes to common shared services once we get into the cloud,” he said. 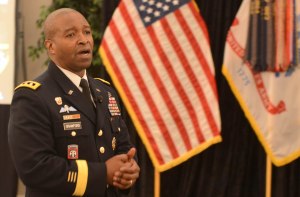