Think of it as machines helping machines: The Defense Innovation Unit wants a machine learning platform that can boost the Pentagon’s existing uses of robotic process automation (RPA) for business tasks.

The goal of the Silicon Valley-based agency’s solicitation is to help nudge Department of Defense RPAs into more complex problem-solving territory by providing pattern recognition and instructions on how to adjust automation to fit changing scenarios.

“The ML platform will identify and suggest corrections to business processes that are not limited to previously well-defined business logic methods,” according to the solicitation.

The DOD has sought to expand its use of RPAs to reduce some of the tedious work many employees are still required to conduct manually. Current use cases are limited to narrow, “well-defined” tasks, the department says, but it wants machine learning to help automate “less-defined” problems like finding abuse or fraud in finical systems, according to the solicitation. The platform will integrate with current RPA technology and be used for data management and algorithmic training.

Machine learning, a type of artificial intelligence system that trains computers to make inferences from large data sets, can help by identifying corrections and fixes to automation that gets stumped on less-defined tasks. The advantage of machine learning is that computers can detect subtle changes that would get lost to the human eye.

The appeal of RPA is simple, DOD officials say.

“We all generally have more work than we have time to do,” Rachael Martin, the Joint Artificial Intelligence Center‘s mission chief for intelligent business automation, augmentation and analytics, said during an April webinar.

Martin said the JAIC is working to help DOD components adopt RPAs. The center is helping coordinate policy and technical solutions for parts of the military to use in its own problem sets, she said in April. Many of the current use cases are being tested in DOD support agencies, she said.

DIU is not looking for a cloud service provider or new RPAs, just a platform that will simplify data flows and use open architecture to leverage machine learning, according to the solicitation. 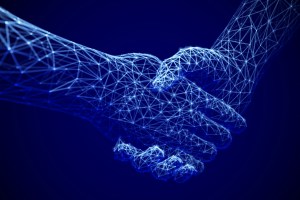