Under the proposal, the Pentagon chief management officer would be required by Jan. 1, 2021, to close DISA — DOD’s IT acquisition service —and transfer key services elsewhere within the Pentagon.

The Texas lawmaker’s Comprehensive Pentagon Bureaucracy Reform and Reduction Act looks to “promote efficiency and agility, reduce duplication and redundancy, and streamline bureaucracy across” the Defense Department’s 28 4th Estate support agencies. Thornberry hopes to include the legislation in the the fiscal 2019 National Defense Authorization Act.

The U.S. Cyber Command would absorb the Joint Force Headquarters — Department of Defense Information Network. That unit, which handles the Pentagon’s network defense, is currently led by DISA Director Vice Adm. Nancy Norton, who reports to Adm. Mike Rogers, head of Cyber Command, in that role.

Thornberry’s legislation isn’t specific about where DISA’s centralized IT acquisition responsibilities would be delegated within DOD, but it “may include the transfer of such services to the 10 military departments.”

Thornberry further targets the Pentagon’s IT operations, calling to limit department senior executive service CIO roles to just five starting in 2021. There are about 60 SES CIOs within the Defense Department, according to Thornberry.

The legislation would also shutter the Defense Technical Information Center, the Office of Economic Adjustment, the Test Resource Management Center, the Washington Headquarters Services, the Defense Human Resources Activity and the Defense Technology Security Administration, and possibly others, depending on reviews. 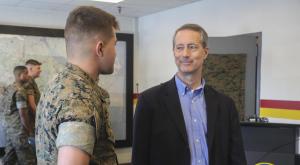