The Federal Aviation Administration wants to test drone detection and mitigation technology at four airports prior to permitting its broader use, according to a new solicitation.

FAA plans to try out at least 10 technologies and systems for dealing with errant and hostile unmanned aircraft systems (UAS), which threaten the safety of airplanes and their passengers, for up to 24 months beginning in early 2021.

The tests will represent the arrival of the new Airport UAS Detection and Mitigation Program, fulfilling a requirement of the 2018 FAA Reauthorization Act that the agency work with the Pentagon and Department of Homeland Security to ensure the technology doesn’t interfere with airport operations.

“Participating airport operators, through an agreement with the FAA, will be required to provide their full support to enable the FAA to conduct the Agency’s test and evaluation effort, to include airport access, support the FAA in positioning equipment, identifying power and communication sources, providing equipment and operators, support personnel, etc. for the full duration of the effort,” reads the request for information released Tuesday. “The airport operator is not permitted to operate the detection and/or mitigation technologies/systems, or the unmanned aircraft.”

FAA already selected the Atlantic City International Airport as its site for preliminary testing of the 10 technologies, which will be named in a broad agency announcement. The airport will host Phase 1 of testing, which looks at environmental impacts and electronic interference due to geography, noise, closeness to cities and airport infrastructure.

The four airports sought in FAA’s latest solicitation will comprise Phase 2 of testing. They must be at least 2,300 acres in size, and one must rank in the FAA’s most recent top 10 airports, based on passenger boarding data. Data gathered a that airport will be compared with the baseline data collected at Atlantic City, while the other three airports will account for different operational environments.

Technologies that don’t perform as advertised in Phase 1 won’t make it to Phase 2, where they’re expected to perform at the same level.

The FAA Reauthorization Act also requires the agency to convene the Aviation Rulemaking Committee to develop a plan for ultimately permitting drone detection and mitigation technology in the National Airspace System. 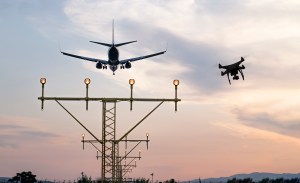