Agencies have been leveraging the Capital Planning and Investment Control, or CPIC, process to track IT spending since it became law as part of the Clinger-Cohen Act in 1996. If IT budget policies were fashion trends, then the federal government would still be sporting the JNCO Jeans and snap bracelets of the 1990s.

“Nothing, I believe, stays valid over a 20-year process without some substantial change that is necessary,” she said at the TBM Public Sector Summit. “Technology has changed. The way we look at our business outcomes within the federal government has changed. So we need to evolve the CPIC process from where it began and, I would argue, where it evolved to over the last 16 or so years to something that’s more modern and appropriate.”

Federal leaders think they have found that more appropriate plan in TBM — a taxonomy designed to help enterprise leaders track IT spending and discern where savings and value can be found.

But incorporating TBM governmentwide and merging it with established practices won’t be easy because it requires collaboration across traditionally stovepiped offices like those of the CIO and CFO.

For Graves, TBM represents a refreshing way for the federal government to assess the value its IT brings to the mission.

“The opportunity I see here with TBM is the ability to start driving away from questions that are conglomerated in a document that evolved over time for different purposes to a specific purpose of driving a business case and showing a business outcome,” she said.

But beyond a best practice, TBM is a lynchpin for the President’s Management Agenda. The PMA has set a target for governmentwide adoption of TBM by fiscal 2022, and Federal CIO Suzette Kent said the taxonomy’s visibility on spending will drive administration goals like IT modernization, data management and shared services, making its adoption essential for agencies.

“The real work here is how this gets implemented and how we move from where we are today into an environment that is aligned with our TBM goals,” Kent said. “That’s not a simple task. It takes a lot of participation across the agency.”

The PMA aids officials seeking that cooperation, Shive said, but he also encouraged those officials to press C-suite leaders on the taxonomy’s advantages.

“If you are trying to increase adoption, be consistent with your messaging to your internal teams,” he said. “Co-opt your CIO and your CFO and get them to do a whole lot of telling instead of asking. Don’t make it an option.” 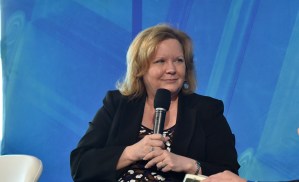