The mission of the decennial census, simply, is to “count every person once, only once, and in the right place,” the U.S. Census Bureau’s Deirdre Dalpiaz Bishop said Wednesday during Esri’s federal user conference.

In the modern era, geographic information systems can help the Census Bureau achieve this.

Per Bishop, chief of the bureau’s geography division, there are essentially four stages to a census. The bureau must: establish where people are, motivate them to respond to the census, collect responses and then, finally, tabulate results. In 2020, Bishop said, GIS systems are going to play a huge role in the first three stages.

Firstly — there’s the task of finding out where people are. In the past, this has been done by going out into the field and, well, looking. Today, using satellite imagery, the Census Bureau has enabled workers to compare images of residential America in 2009 (when the last census began) and today and spot new developments. Then, through data-sharing partnerships with state and local governments, the bureau can often get residence information from those developments. Sending an actual person into the field is the very last resort. This kind of “in-office address canvassing” means that jobs that used to take two hours in the field now take as little as two minutes.

Next, motivating people to respond. The 2020 count has been hailed as the first “modern” census because respondents will be able to log their response online for the first time ever. And the Census Bureau wants to make sure lots of people do this.

Traditionally, the bureau spreads the word of an upcoming tally by partnering with civil society groups like churches and libraries. These partners agree to advertise the census within their communities. But how do community partners know who needs to hear about it most? Enter the bureau’s Response Outreach Area Mapper (ROAM), which the agency began developing in April 2016 and released in the spring of 2018. Powered by demographic data from the American Community Survey, ROAM will help Census and partners identify areas that, because they have a highly mobile population or maybe a population that doesn’t speak much English, will likely be difficult to reach.

Finally, there’s the response collection component. As is always the case with a census, some people will not respond when first prompted, so an enumerator will have to go visit these non-respondents in person and record their answers. In 2010 this was an entirely paper-based process, done by over 600,000 short-term field workers. In 2020, the bureau will equip enumerators with iPhones and a “field data capture” app that will allow the workers to plan their routes, collect responses, log hours and expenses and more, all in one place.

When the bureau tested this new system during the 2018 end-to-end test in Providence, R.I., workers were 50 percent more productive when compared to the paper system, Census Bureau Director Ron Jarmin said. As a result, the bureau expects it’ll only need around 350,000 workers this time around.

The GIS software that underpins all these functions comes from Esri. Theoretically, Jarmin said, this kind of modernization is how the Census Bureau counters the challenges that beset it, from distrust in government to online disinformation campaigns.

“Please respond to the 2020 census,” Jarmin advocated, before leaving the stage. 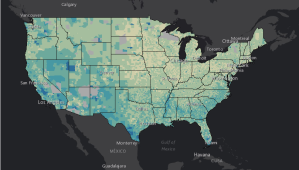 Here are the GIS tools that will support the 2020 census