Federal civil servants often go unthanked in their work to better the lives of Americans. But one organization makes a point every year to celebrate them like movie stars for a night.

The Partnership for Public Service awards the Service to America Medals to a collection of federal servants who are “breaking down barriers, overcoming huge challenges and getting results.” Dubbed the Sammies — named for PPS founder Samuel J. Heyman — the awards are frequently called the Oscars of government service.

In partnership with PPS and the Service to America Medals awards program, the Gov Actually team over the coming weeks will feature several of the finalists celebrated this year for their above-and-beyond service to the country. Co-hosts Dan Tangherlini and Danny Werfel will dive into the backgrounds of the finalists and trace their feats of excellence, which so often go without due recognition.

“The people that win and their stories are just very inspirational,” says Werfel. “And at the end of the day you realize these are public servants doing government work but are also having extraordinary impact on people’s lives.”

“All the people we’re going to talk to are just incredible, and they’ve done amazing work, and they’ve gone through a pretty substantial process to get to this point,” explains Tangherlini.

In the first episode of the series, Dan and Danny speak with Max Stier, CEO of the Partnership for Public Service, and a team of finalists from the Food and Drug Administration, Courtney Lias and Stayce Beck, who paved the way for the approval of the first artificial pancreas device.

Hear more about the Sammies and the FDA team’s path to approving the life-saving device on the latest episode of Gov Actually, and catch all of the episodes on iTunes and SoundCloud. 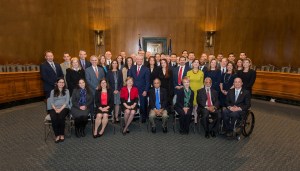