The Partnership for Public Service announced 27 nominees for its annual Samuel J. Heyman Service to America Medal awards Monday, counting among them federal cybersecurity professionals, data scientists and executives innovating the use of drone technology.

The “Sammies” — dubbed “the Oscars of government service” — recognize federal employees who have crafted impactful and innovative solutions to advance the mission of government.

“Amid the political headlines, it’s easy to overlook our nation’s career public servants who perform the essential day-to-day work of government,” Max Stier, Partnership for Public Service president and CEO, said in a statement. “That’s why the Service to America Medals are so important — they showcase the many remarkable men and women who assist their fellow Americans with passion to maintain the safety, health and prosperity of the nation.”

The winners will be announced Oct. 2 at the Partnership for Public Service’s annual awards dinner. For more information on this year’s nominees, visit the Samuel J. Heyman Service to America Medals site. 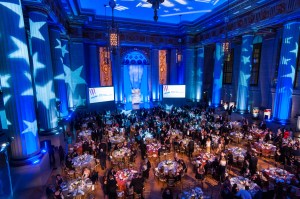