The proof of the power of the cloud is in the enhanced services federal agencies can provide to the public. That’s according to federal leaders from nearly a dozen civilian agencies who joined FedScoop to talk about their success stories, and the challenges they overcame to integrate a growing array of cloud services.

The interview series, Cloud-Driven Innovation in Federal Government, underwritten by AWS, provided a platform for leaders to share their experience of tapping into the power of cloud computing.

Zach Goldstein, chief information officer for the National Oceanic and Atmospheric Administration (NOAA) says that cloud has allowed his agency to “speed up the innovative process, and “transformation research to operations.”

One initiative they undertook for their internal users is to provide them access to high-performance compute capabilities in the cloud versus using on-prem servers, which minimizes the wait time for their research teams to test their ideas.

Additionally, they are improving the efficacy of public access to hurricane tracking data from the National Weather Center, Goldstein explains.

“What we did was we placed in front of both our weather.gov set of websites, and the noaa.gov set of websites — which includes National Hurricane Center, among others — we’ve put them behind cloud-based content delivery networks,” he shares. Those sites can get up to a billion hits in 24 hours during a hurricane event, and the new infrastructure has greatly contributed to NOAA’s ability to handle that traffic.

“The milestone, which actually came in 10 months ahead of schedule,…will put the movement of documentation of some $70 billion worth of parts and goods into one accessible space so the information can be shared, analyzed and protected more uniformly. And the reports that were [previously] being run from the legacy system, and took five to six hours to complete, are now taking about 30 minutes,” she explains.

But these moves to the cloud have not been without their challenges. Ron Thompson, chief data officer and deputy digital transformation officer at NASA shares that his agency needed to work out how to get users access to data, without also providing access to internal information or systems.

“The cloud enabled us to actually store all of this archive information in one place — for both internal and external to NASA users — and it really helped us focus those containers in one place versus having two,” he explains.

For many of the leaders, the exercise of moving to the cloud held some valuable lessons. Dwayne Spriggs, service delivery director at the Dept. of Justice (DOJ) was surprised by the amount of technical debt their organization had accumulated.

“We realized, in working with some of our end-users and customers, that they workarounds they put in place…because the system couldn’t keep up with their business requirements. They had manual processes on top of the automated processes they were using, and that wasn’t captured anywhere. It was just something that was ingrained into institutional knowledge.”

One thing most executives pointed out was that the skills gap to implement cloud modernization initiatives continues to be their primary challenge. That’s why AWS is commiting resources to help fill those gaps, shares Dave Levy, VP, U.S. Federal Government, Nonprofit and Healthcare at AWS.

“By 2025, AWS will help 29 million people globally grow their technical skills with free cloud computing skills training. We are investing hundreds of millions of dollars to provide free cloud computing skills training to people from all walks of life, and all levels of knowledge in more than 200 countries and territories around the world,” he shares.

Other participants who shared their experiences in the video series include:

This video series was produced by Scoop News Group for FedScoop and sponsored by AWS. 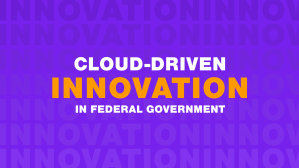