In a highly anticipated letter sent to Congress, the Defense Department once again defended its highly criticized decision to award a single contract for its massive adoption of enterprisewide commercial cloud, saying anything else would prevent a swift and effective migration.

Pentagon Chief Management Officer John Gibson writes in the letter obtained Monday by FedScoop that if DOD competed its Joint Enterprise Defense Infrastructure commercial cloud as a multiple-award contract, it “could prevent DoD from rapidly delivering new capabilities and improved effectiveness to the warfighter that enterprise-level cloud computing can enable.”

As part of the part of the recent appropriations bill to fund the government through September, Congress required the Pentagon to issue the letter within 45 days of the law’s passage. The first draft of the House’s fiscal 2019 National Defense Authorization Act also threatened funding for JEDI if the department didn’t issue a similar report. This report, sent to Capitol Hill last week, is meant to fulfill both requirements.

A multiple-cloud JEDI would also be a costly endeavor, Gibson wrote, resulting in “additional costs and technical complexity on the Department in adopting enterprise-scale cloud technologies under a multiple-award contract.”

“Requiring multiple vendors to provide cloud capabilities to the global tactical edge would require investment from each vendor to scale up their capabilities, adding expense without commensurate increase in capabilities,” the letter says, also mentioning concerns for security lack of standardization among multiple providers. The letter cites the department’s current cloud environment, with more than 500 cloud instances, as an example of the type of decentralized activity it wants to avoid moving forward.

Central to Gibson’s justification is the department’s hope to drive greater interoperability among military services “at the tactical edge” and pool data in a single cloud, creating a data lake of sorts that can serve as the foundation for the department’s adoption of emerging technologies artificial intelligence and machine learning. He said the single award is “consistent with industry best practice.”

“Leveraging ML/AI at a tempo required to be relevant to warfighters, however, requires significant computing and data storage in a common environment,” the letter explains. “The DoD therefore must rapidly adopt the critical foundational technologies available in commercial cloud computing and storage, while eliminating considerable technical debt and security risk.”

Despite concerns that a single award would lead to vendor lock in, DOD tries to assuage those fears with “multiple mechanisms to reduce vendor lock and maximize DoD’s flexibilities going forward,” particularly by obligating itself to only fulfill the contract minimum and limiting the base period to just two years. That will be “sufficient time to validate the operational capabilities of JEDI Cloud and the DoD enterprise-wide approach.” After that, there’s no requirement to enter the optional periods unless it benefits the Pentagon. And if DOD decides to move on at that point, the JEDI contract has built-in portability and data governance requirements that ensures any DOD data is owned only by DOD and can be “expeditiously extracted and returned” when necessary.

While the contracting community has been in an uproar over the single-award nature of the contract, Gibson maintains that the contract — though estimated to be worth billions of dollars — will only be “the initial step toward enterprise-wide adoption of foundational infrastructure and platform technologies available from commercial solutions. It does not encompass the full end-state of the Department’s cloud computing vision.”

He points to the recently launched on-premise MilCloud 2.0 and the Defense Enterprise Office Solution, both under the management of the Defense Information Systems Agency, as complementary efforts in DOD’s greater migration to the cloud.

But ultimately, he puts the onus on the industrial base to innovate so that the eventual DOD JEDI cloud will be interoperable and safe from the threat of vendor lock-in.

“If the commercial cloud marketplace offerings evolve to become interoperable and seamlessly integrated, DoD could have the ability to meet warfighting and business requirements by employing a range of future contract and award types,” Gibson’s letter says. “However, based on the Department’s extensive internal and external research, the planned approach will support rapid adoption of the commercial cloud technology at enterprise-scale, and allow the ability to change approaches in the future if conditions allow.”

Along with lawmakers, many from industry hoped for the eventual release of this report to Congress, including the IT Alliance for Public Sector, which sent an April 30 letter to the chairmen and ranking members of the Senate and House Armed Services committees asking them to make public any DOD reports examining the acquisition process of the JEDI contract.

Trey Hodgkins, senior vice president of public sector for ITAPS, said in a statement, “Our objective was to get answers to questions posed by the sector. When there is transparency in the process, industry has a better sense of the acquisition strategy.” 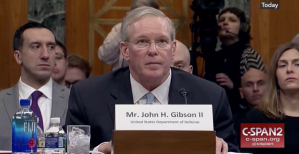 Pentagon to Congress: Multiple awards for JEDI cloud would be too slow, costly