Rubio wrote a letter to national security adviser John Bolton saying he worries the single-award contract will “result in wasted taxpayer dollars and fail to provide our warfighters with the best technology solutions.” While Bolton doesn’t have direct authority over the DOD’s procurement processes, he is one of the president’s closest advisers.

The letter comes as protests to delay and change the JEDI process by Oracle appears to have failed. The competition for the contract is now down to just Amazon Web Services and Microsoft. Pentagon CIO Dana Deasy said recently the award for JEDI will likely come sometime in August.

Rubio’s letter echoes concerns of fellow Republican lawmakers and conservatives who have raised that JEDI’s single-award strategy and gate entry requirements were tailormade for AWS and limit market competition.

Rubio goes on to cite the DOD inspector general’s investigation of potential conflicts of interest surrounding the contract. He said he is “also writing to Acting [DOD] Secretary Esper about these conflicts of interest, and it is my hope the IG’s work will be taken seriously. “

The Florida senator also referenced the Intelligence Community’s move away from a single-cloud infrastructure as evidence of the superiority of a multi-cloud model. IC CIO John Sherman recently confirmed the Central Intelligence Agency plans to pursue a multi-cloud multi-vendor cloud system, but stressed their move was not a repudiation of the DODs cloud mission.

“We don’t believe it is appropriate …  to be used as a yardstick for JEDI as DOD and the intelligence community are at different places in our prospective cloud modernization journeys,” Sherman said. 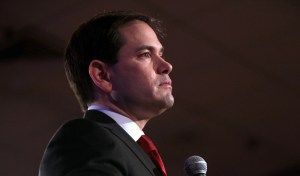