A Court of Federal Claims judge issued an order in favor of the Department of Defense and intervenor Amazon Web Services, denying Oracle’s lawsuit Friday morning. A final judgment and supporting opinion will follow soon, according to court documents.

Oracle claimed that the JEDI acquisition’s strategy use of a single-award contract with gate criteria was unlawful and prejudiced, and that there was a conflict of interest in the development of that contract between DOD and AWS. The protest has delayed the JEDI procurement for more than eight months.

Because the court finds that Gate Criteria 1.2 is enforceable, and Oracle concedes that it could not meet that criteria at the time of proposal submission, we conclude that it cannot demonstrate prejudice as a result of other possible errors in the procurement process. We conclude as well that the contracting officer’s findings that an organizational conflict of interest does not exist and that individual conflicts of interest did not impact the procurement were not arbitrary, capricious, an abuse of discretion, or otherwise not in accordance with law. Plaintiff’s motion for judgment on the administrative record is therefore denied. Defendant’s and intervenor’s respective cross-motions for judgment on the administrative record are granted.

Missing from the order, however, is any mention of the use of a single-award acquisition, which is the central crux of Oracle’s complaint.

This should close this chapter into Oracle’s JEDI protest saga, letting the Pentagon move forward to award the contract sometime next month, according to DOD CIO Dana Deasy. AWS and Microsoft are the only vendors still vying for the contract after IBM and Oracle were removed from the competition earlier this year after failing to pass the gate criteria. But it’s also likely that it won’t be the last we’ll hear from Oracle, who could appeal the Court of Federal Claims ruling.

The Pentagon is happy with the court’s ruling and looking forward to an award.

“We are pleased with the determination made by the U.S. Court of Federal Claims,” spokeswoman Elissa Smith said. “This reaffirms the DOD’s position: the JEDI Cloud procurement process has been conducted as a fair, full and open competition, which the contracting officer and her team executed in compliance with the law. DOD has an urgent need to get these critical capabilities in place to support the warfighter and we have multiple military services and Combatant Commands waiting on the availability of JEDI. Our focus continues to be on finalizing the award decision.”

An AWS spokesperson told FedScoop the company “stands ready to support and serve what’s most important – the DoD’s mission of protecting the security of our country. The DoD deserves access to the best technology in the world and we are unwavering in our support to their mission.” The spokesperson also said the court’s ruling shows that Oracle’s claims were meritless and an attempt to distort the facts.

Oracle, on the other hand, didn’t comment directly about the JEDI procurement or the denied protest, but said: “We look forward to working with the Department of Defense, the Intelligence Community, and other public sector agencies to deploy modern, secure hyperscale cloud solutions that meet their needs.”

The DOD still faces a battle on the Hill, as many lawmakers have expressed concern with the contract in recent week. Sen. Marco Rubio, R-Fla., wrote a letter this week to the White House citing his worries about that the contract limits competition and will “result in wasted taxpayer dollars and fail to provide our warfighters with the best technology solutions.”

However, Rep. Jim Langevin, D-R.I., told FedScoop he supports “the Department of Defense’s Cloud Strategy, of which JEDI is an important pillar.

“An enterprise-wide cloud solution will enable a number of important national security missions for the Department, and it is vital that we move quickly to recognize these gains,” Langevin said in an emailed statement. “While the Pentagon has historically been slow to move on cloud adoption, I believe they are on the right path today.” 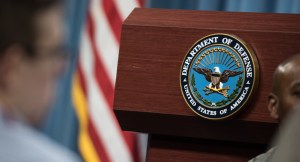