Deputy Secretary of Defense Kathleen Hicks issued a new memo introducing “Data Decrees” that give instructions to the Department of Defense on how to better use the military’s data for everything from back-office operations to battlefield decision-making.

The memo pushes forward the DOD’s data strategy, echoing many of the same themes from the document published in October. The memo gives specific advice on data management for the whole department and calls on senior leaders to use the DOD’s Advana platform as a central place for decision-making data analysis.

In addition to the Data Decrees, the memo requests assessments on structural changes to the department to improve data use. By July 1, a final report is due on the separation of the chief data officer role from the Office of the Chief Information Officer to make the CDO a more independent and central source for data management efforts.

“Data is a strategic asset. Transforming the Department of Defense (DoD) to a data-centric organization is critical to improving performance and creating decision advantage at all echelons from the battlespace to the board room, ensuring U.S. competitive advantage,” Hicks states in the May 5 memo.

The Data Decrees, which were teased by CDO Dave Spirk at the FedScoop IT Modernization Summit in April, include five action items for the department:

Hicks has been a staunch supporter of the DOD’s data efforts since before her confirmation as the department’s No. 2. At appearances, she has said that turning DOD into a data-centric organization is a top priority.

“As we move into an era of data, the department needs to move there too,” she told the Senate Armed Services Committee during her confirmation hearing in February.

Spirk, who helped craft the decrees, said they are a critical part of implementing the strategy. He heaped praise on Hick’s empowerment of data, saying she has not only offered her personal support to the efforts but also that of powerful groups like the Deputy’s Management Action Group to help push initiatives.

“This is a key step in our transition to a data-centric organization and will help empower our warfighters with the data-enabled capabilities they urgently need,” Spirk said in an email to FedScoop.

The audience for the decrees goes beyond just the department, also including the industrial base and allied militaries, which Spirk says will be a critical part of the data ecosystem. The idea is to not have a “common data standard” but to have a federated approach where leaders across organizations can have tailored data sets that still remain interoperable across the department.

“Every leader is a producer, consumer, and steward of data in the missions they perform. For decades, the Department has pursued elusive common data formats and standards to no avail,” Spirk said. 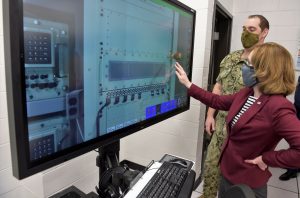