The Trump administration is committed to three areas of focus in promoting U.S. leadership in the global tech economy: the free flow of information, deregulation and protecting American intellectual property abroad.

This was the crux of the short keynote that Michael Kratsios, deputy CTO at the Office of Science and Technology Policy, delivered to the TecGlobal conference Tuesday morning.

“This administration is standing firm on the side of innovation,” Kratsios said.

The event, hosted at the U.S. Chamber of Commerce, looked to discuss how government and private companies are approaching the digital economy and the brave new world of emerging technologies. All technologies, Kratsios reminded the crowd, were once “emerging.” And without “support” from government, they still would be.

The Trump administration, Kratsios said, wants to provide this support through its three focus areas:

First — the free flow of information on the internet. “The Trump administration is committed to protecting a free and open internet,” Kratsios said. “The United States will continue to advocate for open, interoperable communication with minimal barriers to global exchange of information and services.”

Second, deregulation. “The White House is committed to removing unnecessary regulatory burdens on emerging technologies and promoting the safe deployment of these technologies,” he said. “Overregulation can kill a nascent technology before it ever has the chance to fuel economic growth or create new jobs.” Here, as he has before, Kratsios mentioned the White House’s actions to streamline commercial drone testing.

And finally, protecting American intellectual property. “For far too long the United States has been put at a disadvantage by trade agreements that are neither fair nor reciprocal to the detriment of the American worker and the American entrepreneur,” he said. “In contrast, President Trump is standing up for the American technologist and taking action against unfair trade practices.”

Kratsios remains the de-facto leader of OSTP — the office still lacks a nominee for director and U.S. CTO. 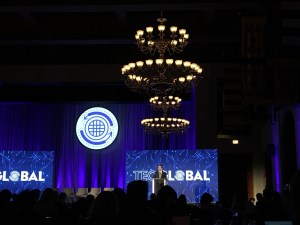