Changes may be coming to the federal bid protest process to ensure that losing bidders cannot derail a government procurement, a top lawmaker on the House Armed Services Committee said Tuesday.

Rep. Jim Langevin, D-R.I., said during an interview at FedTalks that the committee is “looking at” reforms to the federal procurement process and “a company’s ability to hold up defense programs for years.” He said he “hopes to see some positive changes” in the near term, possibly as soon as in the forthcoming fiscal 2022 National Defense Authorization Act, which is set to be passed later this fall.

Langevin expressed his frustration with the current state of federal bid protests in relation to the Pentagon’s beleaguered and now canceled Joint Enterprise Defense Infrastructure (JEDI) cloud contract, which has since been reborn as a multi-cloud acquisition known as the Joint Warfighting Cloud Capability (JWCC). He called the JEDI saga a “source of frustration” for himself and his committee as they continue to see procurements, many in the IT space, “getting bogged down in the protest after protest.”

It seems likely that Congress will have to take some sort of action “to stop big protests from being essentially a matter of routine in the course of action,” he said.

“I want to see us have a fair and open bid process, want there to be transparency. That’s going to be the rule … that those elements have to be in place,” said Langevin, chair of the committee’s Cyber, Innovative Technologies, and Information Systems Subcommittee. “You know, I have deep reservations about the bid process right now and the protest process right now and a company’s ability to hold up defense programs for years. We’re hurting our national security when we do that. We’re hurting the warfighter at the end of the day.”

Langevin acknowledged that the failure of JEDI has put the Department of Defense even further behind in acquiring an enterprise cloud capability, making it imperative that the department gets it right this time with JWCC.

“We were behind the curve when JEDI started,” he said. “And you know, we’re four years further behind now. And so we really need to work harder to get this right with this new JWCC plan that DOD is going with. This is a particular capability that we can’t continue to delay — we need to get this right for the warfighter.” 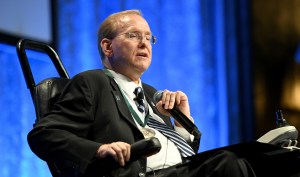