NASA is out to learn more about the outermost layer of earth’s atmosphere, the one that separates us from space.

The space agency is preparing to launch the Global-scale Observations of the Limb and Disk (GOLD) — a piece of scientific hardware that will ride along on a satellite owned by Luxembourg-based satellite operator SES. It’s a kind of ride sharing agreement, if you will.

Once in orbit, while the SES satellite does its thing, GOLD will collect broad data on the ionosphere, the ionized part of earth’s atmosphere. This is important, NASA scientists explained in a briefing Thursday, because we don’t really know that much about the ionosphere.

In the past, most scientists believed that this part of the atmosphere was primarily affected by the sun. However, around 10 years ago, GOLD mission scientist Sarah Jones said, they began to realize that it is also affected by the Earth and terrestrial weather. For example, a tsunami can create air waves that make it up all the way into this outer part of the atmosphere.

The ionosphere is also important because radio frequency must make its way through this layer, and changes in the ionosphere can potentially disrupt or garble radio frequency. Having more data on these changes and forces, scientists say, will be key for all areas where radio frequency or GPS is used — from airline travel, ship navigation and military communication down to cellphone technology and personal GPS.

GOLD is scheduled to launch Jan. 25 from a base in French Guiana. After years of preparations, scientists can’t wait to start gathering information. Richard Eastes, principal investigator for the mission and a scientist at University of Central Florida’s Florida Space Institute, which will be responsible for disseminating data products to the scientific community, is no exception.

When asked what element of the approaching launch makes him most excited, he said with a grin — “Getting the data.” 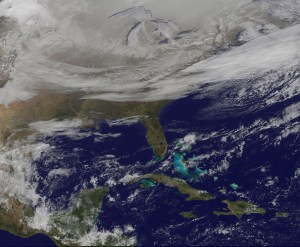