CSRA has won a $22.5 million base contract to help the Navy accelerate its adoption of cloud — and it could be worth close to $100 million by the time it’s over.

CSRA, now a subsidiary of General Dynamics IT, will provide commercial cloud capabilities from multiple services providers — including Microsoft and Amazon Web Services— to the Navy at Impact Levels 2, 4 and 5.

According to the Department of Defense announcement, CSRA’s work will include “Infrastructure as a Service, Platform as a Service, Software as a Service, and other commercially available cloud service offerings.” It will also “provide related services that enable mission owners to transition to and operate within the commercial cloud environment.”

The blanket purchase agreement has a one-year ordering period and four one-year options to extend, which could “bring the estimated cumulative value to” $95.8 million.

CSRA isn’t taking on the contract alone. It has teamed with Beyond20, Carahsoft and Minburn Technology Group LLC for the work. According to the announcement, “Additional team members and cloud service providers may be added to the BPA holder’s team over the term of the agreement in response to Department of the Navy needs.”

The Space and Naval Warfare Systems Command solicited the contract on the General Services Administration’s IT Schedule 70. Four companies bid on the opportunity.

The move of DOD and the military services to the cloud has been in the spotlight recently, particularly as the Pentagon plans to award a single contract for departmentwide commercial cloud services through the $10 billion Joint Enterprise Defense Infrastructure program (JEDI). DOD has been highly criticized for opting to award the contract to a single cloud provider rather than adopting a multi-provider commercial cloud environment, like this Navy contract. 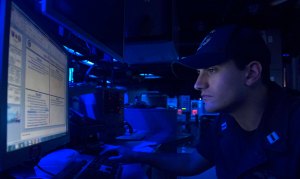