The Navy is moving from tracking ship parts on paper to a platform built around “digital twins”— essentially creating virtual replicas of those physical pieces — the company providing the software announced Wednesday.

In developing a digital twin system, software company PTC will enable the Navy to use augmented reality to see images of the parts and ships in 3-D with corresponding data to track them, instead of storing information about repairs and parts in filing cabinets or PDFs on hard drives.

The new deal between the Navy and PTC is a “seismic shift” in both modernizing an IT system and breaking down cultural “silos” in the service, Ashley Holloway, the Navy’s chief architect for model-based product support, said in an interview. The Navy hopes that the centralization of data with digital twins — which it prefers to call a “digital thread” — will reduce redundancies and provide easier access to more users.

“Now having that digital representation and being able to share that info … that’s the key to managing the model representation of that ship or that system,” Holloway said.

The Navy has already piloted PTC’s software and will expand its use to support more than 15,000 sailors, civilians and contractors. The company estimates the Navy could invest nearly $100 million over the next five years in the project.

According to a news release, the selection of PTC’s software was in part due to its certified software-as-a-service cloud infrastructure which has both Federal Risk and Authorization Management (FedRAMP) Moderate and Department of Defense Impact Level 5 security compliance.

The task now for the Navy and PTC is to work with users to configure and apply the commercial software in a way that will work for the service. Expansion is scheduled to take place in fiscal 2021.

“This is a digital transformation of the way the Navy operates and maintains its ships,” PTC CEO Jim Heppelmann said in an interview.

Holloway said that the transformation won’t stop just at physical product management. The methods of maintaining central digital repositories for managing physical systems could extend to tracking and modernizing other IT systems.

In February, Thomas Modly, the former acting secretary of the Navy, announced a “stem-to-stern review” of redundancies in the Navy. The goal has been to find at least $40 billion in the Navy’s budget to take from things like redundant or outdated IT systems and reinvest into new programs. The review is similar to the Army’s so-called “night courts.”

Holloway said that a system like PTC’s Windchill would be instrumental in identifying the type of IT systems that the Navy wants to eliminate and reinvest in.

“All of these pieces are coming together and definitely are a trend,” she said of the move to digitally tracking products and system management. 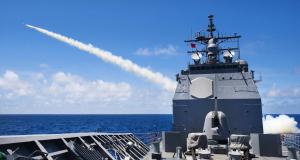