The Department of Defense prevailed in Oracle’s lawsuit protesting its $10 billion JEDI cloud procurement, but a newly unsealed court opinion shows the Pentagon didn’t walk away from the protest completely unscathed.

Bruggink denied Oracle’s pre-award bid protest earlier this month because the company simply couldn’t meet the technical requirements for the contract. While Bruggink critiqued the Pentagon’s justification for a single-award contract, the comments ultimately didn’t matter for Oracle’s argument because the company couldn’t make a competitive bid for JEDI, short for the Joint Enterprise Defense Infrastructure.

Because “Oracle concedes that it could not meet [technical gate requirements] at the time of proposal submission, we conclude that it cannot demonstrate prejudice even if the procurement was otherwise flawed,” says the opinion.

The court’s finding is slightly less straight forward than just that. There were two justifications for the use of a single award that it analyzed — one from JEDI’s lead contracting officer that it already upheld in an earlier ruling, and another from Undersecretary of Defense for Acquisition and Sustainment Ellen Lord that Bruggink described as flawed. Each justification pulls from different statutes in the Federal Acquisition Regulation.

“This conclusion is obviously somewhat in tension with our previous decision upholding the [contracting officer’s] decision that multiple awards are not allowed,” the opinion says. “This peculiar state of affairs is an artifact of a code section which is a mixture, rather than an alloy, of various pieces of legislation.”

The Pentagon went on the defensive Sunday night issuing a statement on the court’s findings. Spokeswoman Elissa Smith said the DOD is “pleased with the full ruling” but takes exception to the determination of Lord’s justification as “flawed.”

“The Court notes the two findings are ‘somewhat in tension,’ but the finding that the DOD contracting officer ‘reasonably justified’ her justification for a single award approach is clear,” Smith said. “As DOD has asserted all along, and as confirmed by the Court, DOD reasonably evaluated and equally treated all offerors. The court’s decision unequivocally concludes that JEDI is a full and open competition and, despite uninformed speculation to the contrary, its integrity remains intact.”

Though the finding doesn’t change anything in Oracle‘s failed lawsuit in federal claims court, it could, however, add fuel to the fire if Oracle was to appeal to a higher court. Or when one of the other companies vying for the contract — now down to just Amazon Web Services and Microsoft — ultimately loses the competition, it could protest the contract after its award and build its case around the judge’s opinion that the acquisition is “flawed.”

Oracle also alleged in its lawsuit that a trio of former DOD officials created a conflict of interest in their connections with AWS, influencing the development of an acquisition strategy that favors Amazon. The court denied that claim saying that even if those officials stepped out of line in their dealings with AWS, they were just “bit players” in the overall landscape of the acquisition and had “no impact on the integrity of the procurement.”

“DOD officials directly involved in the work of this procurement along with the senior leaders charged with making the critical decisions related to JEDI have always placed the interests of the warfighter first and have acted without bias, prejudice, or self-interest,” she said. “The same cannot be said of all parties to the debate over JEDI.”

That hasn’t stopped Republican lawmakers from continuing to try to derail the JEDI contract, issuing letters to President Trump and Secretary of Defense Mark Esper.

Over the weekend, CNN issued a report that claims Oracle lobbyists are orchestrating the efforts by passing a document around Washington with a flowchart titled “A Conspiracy to Create a Ten Year DoD Cloud Monopoly.”

“The one-page document was presented to Trump along with other information in a meeting in the last week where the contract and Amazon’s possible award were discussed,” according to CNN. 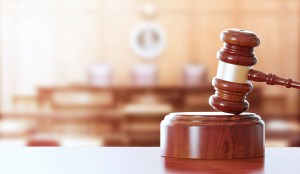