Republicans on Capitol Hill continue to press for a delay in the Pentagon’s $10 billion Joint Enterprise Defense Infrastructure (JEDI) contract following President Trump’s remarks that the White House would “take a very strong look at” the acquisition.

Earlier this month, the JEDI contract cleared a major hurdle after the Pentagon prevailed in a months-long slog in the Court of Federal Claims prompted by Oracle, whose lawsuit claimed the acquisition limited competition and that former department officials were in a conflict of interest with Amazon Web Services. That clears the path for DOD to move forward awarding the contract sometime in August for enterprise commercial cloud capabilities that would, theoretically, extend to the battlefield. Just Microsoft and AWS remain in competition for the contract. Oracle and IBM did not survive earlier portions of the acquisition process.

Both Rubio and the House Republicans asked that the contract be delayed to await an ongoing inspector general report regarding DOD employees who worked on the JEDI deal and reportedly did not properly disclose work for unnamed private companies. The letters are likely referring to the contract’s leading contender, Amazon Web Services.

The DOD contracting officer leading the JEDI acquisition earlier cleared the contract to move forward, saying there had been “no adverse impact on the integrity of the acquisition process.” However, the official’s “investigation also uncovered potential ethical violations, which have been further referred to DOD [inspector general],” according to a Pentagon spokeswoman.

“These admissions are highly concerning in a major procurement, which should proceed free of any bias or conflict,” Rubio’s letter stated, referring to the alleged conflicts of interest.

The federal claims court has also already ruled that “organizational conflict of interest does not exist and that individual conflicts of interest did not impact the procurement.”

Rubio doesn’t sit on any defense-related committees and tends to focus on foreign policy issues, but he occasionally will weigh in on technology topics. During the 2016 election cycle, Oracle Executive Chairman Larry Ellison donated $5 million to the pro-Rubio super PAC Conservative Solutions and gave $350,000 to another pro-Rubio PAC, the Florida First Project, according to Open Secrets. Rubio’s office declined to comment.

Other lawmakers, meanwhile, want the Trump administration to get moving on the JEDI contract. Following the president’s remarks about it, a group of four Republican House members wrote a letter urging the president to consider the national security implications of the contract.

“My view is that moving to the cloud is essential — we are behind in doing so,” Rep. Mac Thornberry, R-Texas, told FedScoop during a reporter roundtable Wednesday. 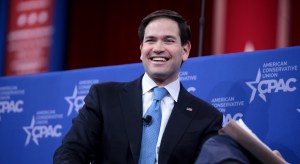