Palantir Technologies has recorded a 34% year-on-year rise in third quarter revenue within its government services division.

Revenue at the unit rose to $218 million up from $163 million in the prior year period, accompanying a 36% rise in the company’s total Q3 revenue growth.

The jump in public sector earnings follows a number of major contract wins for the AI and machine learning company, including with the Air Force, the Department of Health and Human Services and the National Institutes of Health.

The company also last month was selected to provide the Army’s Distributed Common Ground System-Army Capability Drop 2 – an intelligence and data fabric contract that is expected to be worth up to $823 million.

Last month, FedScoop revealed that Palantir had inked a $90 million data integration contract with the Department of Veterans Affairs. The company has also inked a slew of smaller contracts recently, running from several thousand dollars to several million with agencies like the Internal Revenue Service, Customs and Border Patrol and the National Institutes of Health, according to federal procurement records.

Within Palantir’s private sector division, revenue rose by 37% to $174 million. In total, the company closed 54 deals each worth at least $1 million during the third quarter. 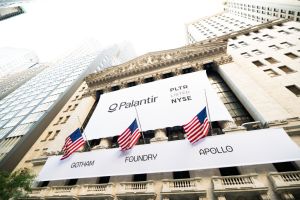