New Defense Department CIO Dana Deasy will be leading the Pentagon’s “cloud initiative” from here on out.

Deasy, who’s been the department’s CIO since May, replaces Chief Management Officer Jay Gibson at the head of the program, effective June 22.

“Under Deasy’s leadership, the department will gradually consolidate its disparate networks, data centers and cloud efforts to manage them at the enterprise level,” the statement says. It continues, “Different DOD components manage many of the department’s networks, data centers and clouds. Consolidating these disparate efforts at the enterprise level will enable the CIO to provide greater security and ensure greater reliability of the department’s digital infrastructure, while achieving cost savings.”

Shanahan’s statement, however, makes no specific reference to the multibillion-dollar Joint Enterprise Defense Infrastructure cloud program — a dubious move given the incredible interest around the contract that’s been at the center of the Pentagon’s newfound cloud strategy since late last year. The final solicitation for that contract was due sometime in May and is still missing in action.

DOD’s Cloud Executive Steering Group began under the leadership of Ellen Lord, undersecretary of defense for acquisition and sustainment, as the central effort to reform the department’s enterprise cloud strategy. Shanahan then transferred the reins to Gibson in January, at the time adding acting CIO Essye Miller to the steering group. It’s unclear if this model will remain under Deasy’s leadership of the cloud initiative.

Deasy joined the Pentagon after spending a handful of years as CIO of JPMorgan Chase. According to the Wall Street Journal, Deasy led JPMorgan’s move to the public cloud. He left the Fortune Top 50 company late last year. In one of his first public speaking engagements as DOD CIO, Deasy called the cloud age of IT “a brilliant opportunity to re-engineer.”

As for JEDI, the public is waiting with baited breath for any word on when the solicitation will hit the street. DOD had hoped to award a single contract to a commercial cloud provider in September. That will likely be pushed back now with the delayed release of the solicitation. It’s unclear if Deasy’s new leadership of the initiative will change the acquisition strategy at all.

The proposed JEDI contract, as it is, has ruffled quite a few feathers in the cloud industry with DOD’s decision to use a single award acquisition for what could be up to a 10-year contract. Despite pushback from vendors and questioning from Congress, the JEDI team has maintained that it will make a single award.

Not every vendor feels a single award is a bad idea, however. Teresa Carlson, head of public sector Amazon Web Services, told FedScoop in an exclusive interview that “a single award with one cloud” is a good idea “for now.” 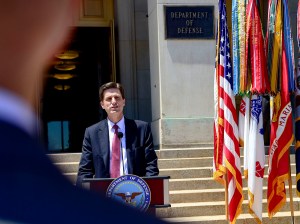