The Department of Defense is working with allies on a highly classified project to demonstrate the capabilities of artificial intelligence-enabled drones that are designed to operate in highly contested environments.

“There’s so much stuff going on … [with] AI and autonomy in particular,” Shyu said at the Special Operations Forces Industry Conference (SOFIC). “What can I say that’s unclassified? Let’s just say we’re working to do some demonstration of pretty exquisite capabilities, OK? I want to be able to fly autonomously in a heavily contested area … We’re working with allies on that right now.”

Shyu was tight-lipped and didn’t offer additional details about the project, including which specific systems are involved.

“I’ll just leave it at that since this is an unclassified forum,” she said.

“Unmanned systems have shown great value to SOF operations and will continue to show great value. The issue for us is, we have a small formation and everyone in that formation is dedicated to a certain task. And if I’ve got to pull an operator to have them go one-on-one to operate that unmanned system, I’ve just pulled them away from the tasks that they’re … supposed to be doing,” SOCOM Acquisition Executive Jim Smith said at the conference on Tuesday.

He continued: “That’s why we’re really interested in autonomy to be able to get the operator off of the Xbox controlling the unmanned system, and back over their rifle sights and doing what they were paid to do. And so that’s where I think unmanned systems will go in the future.”

Officials at U.S. Indo-Pacific Command have been banging the drum about the need for new UAVs that could be employed in a war against China, which has advanced air defenses.

Shyu did not disclose which allies the Pentagon is collaborating with on the autonomous drone project that she mentioned, but in her opening remarks at the SOFIC conference, she noted that the R&E directorate is working closely with AUKUS partners Australia and the United Kingdom. AUKUS is a trilateral partnership between the U.S., U.K. and Australia that is focused on advanced military technology.

Last month, the White House said AUKUS has made “strong progress” in the capability areas that leaders of the three nations identified as priorities last year, which includes AI and autonomy.

Another top priority for Shyu is integrating cyber capabilities with multifunctional sensors.

“I’m pushing very much towards integrated sensing and cyber,” she said. “What does that mean? I am interested in pushing the technology towards developing a single sensor that has the ability to listen, the ability to do jamming, ability to communicate, the ability to do [cyberattack] injects all in one, OK? So we’re working on that as well.” 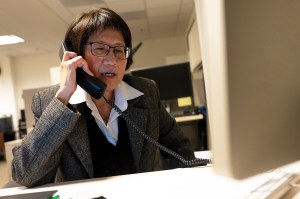