The Navy issued a request for proposals Thursday for the IT services part of long-awaited, massive Next Generation Enterprise Networks Recompete (NGEN-R).

This latest portion of the NGEN-R contract, which is set to replace the Navy’s preceding $3.5 billion Next Generation Enterprise Networks acquisition, will specifically procure service, management, integration and transport (SMIT).

“Today’s successful release of the NGEN-R SMIT RFP is a major achievement in implementing the Navy’s IT acquisition strategy to segment network services for the Navy Marine Corps Intranet and the Marine Corps Enterprise Network into multiple contracts,” Capt. Ben McNeal, Naval Enterprise Networks program manager, said in a release. “Separating IT services into multiple contract segments makes management, financial and competitive sense for the Navy.”

The Space and Naval Warfare Systems Command (SPAWAR), the procuring service, issued an RFP in September for hardware devices “as a service,” meaning the vendor will lease them out on a temporary basis.

The original NGEN contract expired in June. Navy extended it with a $787 award to Perspecta, which will expire next September. 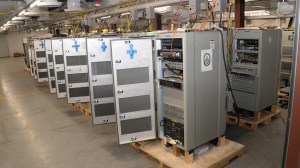 IT services portion of $3.5B Navy NGEN recompete goes live