The Space Force started receiving its first cybersecurity personnel from other military services at the beginning of February, the chief of space operations said recently.

Most of those cyber personnel transitioning into the new force come from within the Department of the Air Force, which oversees the Space Force. In total, the force has brought in 2,400 of the 6,400 active duty cyber personnel it’s planning for, Gen. John Raymond, commanding general of the Space Force, told reporters during a Defense Writers Group media call

These Cyber Guardians — what members of the Space Force are called — will be protecting satellites and other space-based assets from hacking. While Space Force leaders often repeat they want to keep the newest branch of the military “lean,” cyber personnel is one category they are actively bringing onboard.

Civilian leadership in the Department of the Air Force has put greater emphasis on satellite security. At the DEF CON 2020 conference, the Air Force and Space Force partnered with ethical hackers to find better ways to harden their cyberdefenses. Working with outside experts helped the department to better identify vulnerabilities.

But now the force wants its own cyber personnel to boost its cyber expertise.

“They will be part of our crew force; they’ll understand the cyber terrain of space and will help us protect this critical domain from that threat,” Raymond said of the new cyber operators in the Space Force. 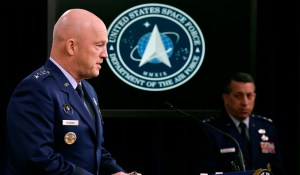