The newly formed Space Force has aspirations to be an “agile” and “lean” force. To turn that into a reality, it’s intentionally building out a risk-friendly culture and making its own software acquisition process

Gen. John Raymond, the force’s first chief of the space operations, told Congress on Wednesday that a draft of the force’s acquisition policies will be completed next week. The draft will include recommendations for how to reduce requirements lists and work with non-traditional defense companies, Raymond said. The Space Force will also lean on the Air Force, the department it is housed under, for “80 percent” of its support services.

Beyond specific changes to how the Space Force will structure its acquisitions, it wants to establish a culture that is risk-tolerant, Raymond told the House Armed Services Committee Wednesday.

“We are a startup company ourselves,” he said.

Sectary of Defense Mark Esper has said that the risk-averse culture in DOD’s acquisitions has been the largest hurdle for its modernization and investing in emerging technology. Raymond told Congress he will ensure that cultural hurdle doesn’t slow his new force. Part of that will include working with innovative companies that aren’t typical defense contractors, such as startups or larger tech companies that have steered clear of the bureaucracy of the Defense Department.

“We have to go at speed,” Raymond said.

As the Space Force develops, the ability to quickly and securely digest and integrate data will be critical to its mission of space defense. To aid with this, the force is already building its own software development and acquisition program, Raymond said. It appears it will similar to but separate from the Air Force’s Kessel Run software factory.

“We are already designing how we want to do software in this force to be able to go fast,” Raymond said. He added that the Space Force will be “more software-based than hardware-based.”

Additionally, part of the Space Force’s larger plans for acquisitions is to delegate more authority to lower-level officers rather than concentrating power at the general level, which is the status quo across the Air Force. In May, roughly 65 cadets from the Air Force Academy will be direct-commissioned to the Space Force to begin filling out the ranks of officers.

Gen. John Hyten, the current vice-chair of the Joint Chiefs of Staff, has said that delegating authority down to the colonel and captain level will be key in how the DOD improves the way it buys tech. 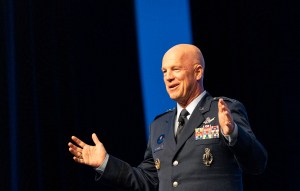