The State Department has issued a request for proposals for its $10 billion-ceiling EVOLVE IT support services solicitation.

EVOLVE was launched to help three procurement offices at the State Department to establish a more flexible IT services acquisition process.

As part of the solicitation, State is seeking vendors for indefinite-delivery, indefinite-quantity contracts to provide services across five categories: IT management services, cloud and data center services, application development services, network and telecommunication services and customer and end-user support services.

The agency will set out specific requirements within each individual task order issued, according to the RFP. Prospective offerors will bid on contracts with mission objectives both within the continental United States and outside the continental U.S.

Late last month, the State Department in procurement documents explained its rationale for pursuing the solicitation. According to State, the department landed on EVOLVE after considering three other alternatives: recompeting incumbent contracts in place, limiting the scope of EVOLVE to “other than small” contracts and using existing governmentwide acquisition contracts.

In its explanatory document issued at the time, the agency said recompeting incumbent contracts would run increased risks of vendor lock-in and potential conflicts of interest.

In July, the State Department raised the potential ceiling of EVOLVE, which is the largest such indefinite-delivery, indefinite-quantity contract to be issued by the department. 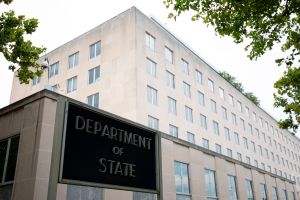 State Department issues RFP for $10B EVOLVE IT services procurement