The State Department has raised the potential ceiling of its EVOLVE IT services solicitation to between $8 billion and $10 billion in a new draft solicitation issued Friday.

The department issued a request for information seeking feedback on the new draft. According to a SAM.gov notice, the agency will also take further input through a question and answer session due to take place on July 26.

State says in the draft that it will finalize a specific ceiling for the final request of proposals somewhere between $8 billion — the contract’s original estimated ceiling — and $10 billion.

EVOLVE is the largest such indefinite-delivery, indefinite-quantity contract to be issued by State, and the department had previously sought to make the award by the end of June.

The contract has five pools, and State is intending to award up to six spots to federal contractors in each category.

EVOLVE is intended to help the department procure IT services obtained through State’s expiring Vanguard 2.2.1 contract as well as other future needs not met under that previous contract. SAIC won the Vanguard 2.2.1 in 2010 for $2.5 billion.

Former State CIO Keith Jones, who left the State Department last month, previously said that the agency would continue to issue and award task orders through the IDIQ solicitation on a rolling basis.

EVOLVE was initially intended to serve the needs of the State Department’s Bureau of Information Resource Management, but IT leaders at the agency intend for it to be used to acquire more common services.

Responses to the RFI are due by July 22. 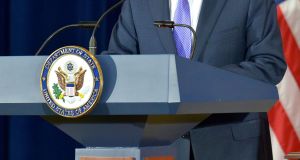 State raises potential EVOLVE IT contract ceiling to up to $10B