As part of the White House’s efforts to drive IT modernization, Federal CIO Suzette Kent said the Trump administration will begin technology policy reviews starting next week and is preparing to update federal cybersecurity metrics under FISMA.

Noting, as an example, that it was unlikely that someone at the conference would still be using a cell phone made in 2008, Kent said that it was unacceptable for the government to continue to operate with policies from the same era.

The policy reviews will begin the first week of September and will run until the end of the year, she said. The goal would be to meld the private sector’s best practices with government expertise to help craft technology solutions faster.

The review effort comes as the Office of Management and Budget continues to drive change tied to initiatives such as the President’s Management Agenda and 2017’s IT modernization report.

The modernization report calls for new cybersecurity metrics under FISMA. Kent said those should begin appearing by the end of the third quarter of fiscal 2018.

Kent also cited progress by the Trump administration in some key IT-related areas:

“These are only steps on the journey to a digital, data-driven and technology-enabled federal government,” she said. “So the processes that we are putting in place to move quickly, leverage leading-edge technology, to be accountable and transparent about results, that’s what we need to never stop. We have to continue to do that.” 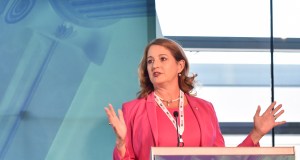