Without mentioning China by name, both parties acknowledged the threat foreign adversaries pose to the telecommunications supply chain.

In recent years the U.S. has struck similar agreements with the Western Balkans countries of Serbia, Kosovo and North Macedonia to assess the risk of 5G equipment supplied by vendors with connections to foreign adversaries, namely Huawei and ZTE, before buying.

“I think we’re setting a very strong example together here today, particularly on the need to make sure that when it comes to our most sensitive technology and networks, we’re working with trusted vendors,” said Secretary of State Antony Blinken.

Albania was elected to the U.N. Security Council for a two-year term beginning next year on Friday. The country previously participated in a U.S. Army-led, joint military exercise with 27 European and NATO countries called DEFENDER-Europe 21.

House lawmakers recently reintroduced legislation that would see the U.S. Development Finance Corporation fund 5G infrastructure projects in 22 Central and Eastern European countries including Albania. The bill is seen as a counter to China’s Belt and Road and 17+1 initiatives seen as taking advantage of a region that’s historically lacked telecom infrastructure since the Soviet era.

“[W]e have undertaken these issues … asking also the other countries in the region join and to put all together our effort for a very secure path of communication,” Rama said. “And to put this path of communication of very critical services in the hands of the people of Albania, in the hands of institutions of our security forces, and to not allow compromise by third actors and sometimes-malign actors.” 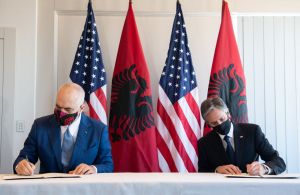