The Department of Defense personnel who evaluated proposals for the $10 billion Joint Enterprise Defense Infrastructure (JEDI) cloud contract were not pressured by the White House to award the deal to Microsoft, as far as the department’s inspector general can tell.

The Pentagon IG published a 300-plus-page report Wednesday on the findings of its long-anticipated investigation into the JEDI procurement, which it began last year. The review was launched initially to explore the single-award nature of the JEDI procurement and potential conflicts of interest raised in the early stages of the acquisition. But it was expanded to also address claims that the White House directly influenced the selection of a winner and other post-award handling of sensitive information.

Most notably, the watchdog concludes after interviewing “25 witnesses related to the source selection” and reviewing “slide presentations and other documents from JEDI Cloud procurement briefings presented to Secretary [Mark] Esper and to White House officials from June 10 through September 23, 2019” that the source selection team made its decision to award the contract to Microsoft independent of influence from President Donald Trump or his staff.

Losing bidder Amazon Web Services has alleged in a Court of Federal Claims lawsuit that political pressure from the top of the Trump administration led to “egregious errors” in the Pentagon’s evaluation of bids for the contract.

“[W]e believe the evidence we received showed that the DoD personnel who evaluated the contract proposals and awarded Microsoft the JEDI Cloud contract were not pressured regarding their decision on the award of the contract by any DoD leaders more senior to them, who may have communicated with the White House,” the report says.

Moreover, the report says, “witnesses also told us that public statements from the President and ‘media swirl’ about the contract did not directly or indirectly influence the integrity of the procurement process or the outcome of the JEDI Cloud source selection.”

The report does, however, spotlight that the White House did have at least some interest in the JEDI procurement in the months leading up to its award. DOD CIO Dana Deasy and one of his deputies, Peter Ranks, were asked to brief acting White House Chief of Staff Mick Mulvaney and deputy national security adviser Charles Kupperman on the procurement in a series of meetings starting in July 2019. But the report claims those meetings stuck strictly to the technical nature of the procurement and the DOD’s cloud strategy, and didn’t involve talk of the specific vendors competing for the contract.

Unfortunately, the report wasn’t completely crystal-clear on the matter, because White House staff would not participate in oral interviewing for the IG’s investigation, claiming presidential communications privilege. The IG declined to accept written answers. And senior DOD officials were instructed not to answer questions about communications with the White House. Because of this, the IG says, “we could not definitively determine the full extent or nature of interactions that administration officials had, or may have had, with senior DoD officials regarding the JEDI Cloud procurement,” which prevented it from reviewing the matter fully.

The Pentagon is taking it as a major win. “The Inspector’s General final report on the JEDI Cloud procurement confirms that the Department of Defense conducted the JEDI Cloud procurement process fairly and in accordance with law,” a Pentagon spokesperson told FedScoop in an emailed statement. “This report should finally close the door on the media and corporate-driven attacks on the career procurement officials who have been working tirelessly to get the much needed JEDI Cloud computing environment into the hands of our frontline warfighters while continuing to protect American taxpayers.”

An Amazon spokesperson, however, said the report “doesn’t tell us much.”

“[It]t’s clear that this report couldn’t assess political interference because several DoD witnesses were instructed by the White House not to answer the IG’s questions about communications between the White House and DoD officials,” the spokesperson said. “The White House’s refusal to cooperate with the IG’s investigation is yet another blatant attempt to avoid a meaningful and transparent review of the JEDI contract award.”

Ultimately, the report says, the source selection authority — the person designated to make the final decision on the contract — “determined that Microsoft represented the best value to the Government and selected Microsoft’s proposal for award,” with the support of other source selection and evaluation teams.

The story arc of the IG’s investigation started last year with allegations of conflicts of interest involving former DOD employees who worked on the JEDI contract in some capacity and went on to work with AWS — the company that, at the time, was considered the frontrunner to win the contract.

Those complaints were spearheaded by Oracle, an early bidder in the JEDI procurement that didn’t make it past the gate criteria stage. The company is still fighting the battle in a federal appeals court claiming that DOD’s single-award procurement is not appropriate. (The IG, however, deems the single-award contract to be “consistent with applicable law and acquisition standards.”)

The report concludes that one central figure in those allegations — Deap Ubhi, who worked on market research for the JEDI acquisition — did violate ethics agreements by negotiating and accepting a job with AWS during that time. His involvement, however, was deemed “not substantial” and did not “affect the conduct or outcome of the JEDI Cloud source selection.”

Current Pentagon official Stacy Cummings, the principal deputy assistant secretary of Defense for acquisition, also violated an ethical agreement, the report said. Cummings was said to have participated in discussions around the contract while owning stock in Microsoft.

The IG recommends the Office of the Undersecretary of Defense for Acquisition and Sustainment take action for Cummings’ ethics violations, which could include “counseling and training.”

AWS used that information as part of its resources to inform the 265 debriefing questions it sent to the DOD after it was made aware of its loss, the new report says.

Microsoft’s Frank X. Shaw, corporate vice president of communications, told FedScoop in a statement: “As the IG’s report indicates, Amazon has proprietary information about Microsoft’s bid that it should never have had. At this stage, Amazon is both delaying critical work for the nation’s military and trying to undo the mistake it made when it bid too high a price.”

On top of this, the team inadequately redacted the names of members of the source selection personnel in debriefings to both companies.

The inspector general recommends the DOD chief management officer and general counsel “consider administrative action against appropriate individuals” who made the errors. On top of this, the department should conduct training and develop a standard redaction policy, the report says.

Meanwhile, Amazon’s protest in the Court of Federal Claims continues independent of this IG investigation. The court hasn’t yet officially addressed AWS’s allegations that the White House pressured the Pentagon’s award to Microsoft. However, the court does consider Amazon’s case  — that the DOD erred in parts of is evaluation of the two companies’ bids — strong enough that it put work under the contract on hold until the lawsuit is settled.

This story is developing and will be updated. 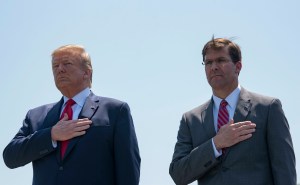