The Department of Defense’s biggest mistake in its now yearslong effort to develop and award the Joint Enterprise Defense Infrastructure (JEDI) cloud contract is that it let the narrative escape its control, CIO Dana Deasy said Wednesday

“Once you let the narrative get away from you … trying to recover is nearly impossible,” Deasy said during the Forbes CIO Summit Virtual Series Wednesday of the $10 billion contract, which is still tied up in legal limbo. The DOD has agreed to take corrective actions on the acquisition based on complaints Amazon Web Services waged against it in a protest of Microsoft’s win of the award late last year.

JEDI, by all accounts, was developed in 2017 to be the DOD’s landmark adoption of an enterprisewide cloud, a central pillar in its modernization strategy. But the contracting process became marred in allegations of political influence, which Deasy has denied and internal investigations did not find evidence of. Deasy recently said that the DOD plans to re-announce an award by the end of August.

In particular, what escaped the DOD’s messaging were details on the pricing structure. While the contract had a ceiling of $10 billion over 10 years, its initial instance was only for two years and $1 million, Deasy said. Headlines that described the potential size of the cost, while accurate, inflated the political turmoil over the contract, he said.

The “lost narrative” lesson-learned has become a common one in the CIO’s office at DOD. After Google pulled out of Project Maven, an artificial intelligence program to analyze drone footage, leaders offered a similar story to explain the controversy.

“This idea of transparency and a willingness to talk about what each side is trying to achieve may be the biggest lessons of all that I took from it,” Lt. Gen. Jack Shanahan — who recently retired as the leader of the Joint AI Center inside the CIO’s office —said of Project Maven in November.

Despite the narrative on JEDI slipping out of DOD’s hands, Deasy said the push to modernize the military’s digital services continues with cloud central to that plan. Deasy also said that his efforts as CIO of the government’s largest bureaucracy have been informed by trips to the frontlines of battle. Early in his tenure, he visited Afghanistan and spoke with operators who gave candid feedback about the technology he was working to modernize. Much of the feedback showed how degraded and denied networks can become in battle and how little time there is for troops to ingest the many live streams of data being displayed at times.

The trip “was actually taking a real-world environment … and actually seeing how our men and women use the technology,” he said. 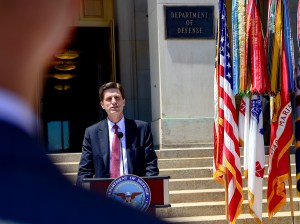 Deasy: Biggest JEDI mistake was letting the narrative slip away from DOD