Josh Marcuse, the head of the Defense Innovation Board, is leaving his job as a champion of tech in the military to join Google’s public sector shop.

Marcuse has served as executive director of the innovation board since 2016 and in a number of other innovation policy positions. In the director role, he organized the board and its meetings, and facilitated its recommendations to the Department of Defense. The board is comprised of a range of technology executives, academics and other experts who offer advice to the DOD on innovation and tech matters.

At Google, Marcuse will serve as head of strategy and innovation for global public sector.

“The most important thing of all is understanding the people and culture dimensions to all these changes,” he told FedScoop of his work in 2018. “Innovation is not a technical process, it is a human process.”

The board only serves in an advisory capacity to the DOD. But under Marcuse’s leadership, it encouraged major reforms to the department’s software acquisition policies and drafted the Joint Artificial Intelligence Center’s ethical principles, which were adopted in near totality. Marcuse was also an early advocate for the Joint Enterprise Defense Infrastructure (JEDI) cloud procurement.

Beyond tech acquisition, the board recently submitted guidance to the DOD on how to implement a new “digital people officer” to attract more cyber talent to the military. Marcuse told FedScoop in 2018 that adding tech-talented people to the department was a top priority of his work. He was also involved in bringing more tech training to leadership in the government.

The innovation board has other ties with Google. DIB Chair Eric Schmidt is the former CEO of the tech giant. 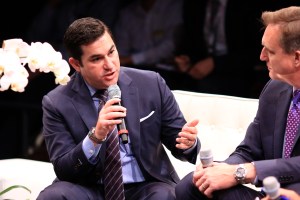