The Department of Veterans Affairs is taking the commercial approach, moving all of its “current and new applications to the cloud,” says CIO James Gfrerer.

That’s no light load. Gfrerer said Wednesday at ACT-IAC’s Health Innovation Summit that “the target is 350 applications, which is about roughly half of our portfolio, will be moved to the cloud by 2024,” he said.

The migration is informed by other “very bandwidth- and resource-hungry” technologies, like VA’s adoption of a modernized electronic health record and expansion of secure telehealth capabilities that “allow veterans to access their information and services quickly and efficiently,” Gfrerer said. “VA is modeling a private sector approach around cloud migrations using current [commercial] systems that are scalable and agile.”

Gfrerer is new to the job, joining after his Senate confirmation in January. He came Wednesday with an anecdote that predates his service about the power the cloud can bring the VA. In the aftermath of Hurricane Harvey in 2017, many Veterans Benefits Administration regional offices were closed in southern Texas. But VA “had just migrated some Veterans Benefits resources and materials into the cloud, and when all of those regional offices and sub-offices were shut down, every one of those rating specialists and the folks in Veterans Benefits Administration was able to continue their work without the facility being in operation.”

“When you look at the backlog and the ability to continue operations and rating schedules and processing claims, that’s a very important business outcome that flows from that,” he said.

Others speaking Wednesday pointed to different examples of the cloud can revolutionize medical care, possibly at the VA.

Referencing the department’s migration, Greg Bateman, a managing director with Microsoft, said: “I think we will all see that the benefit of the cloud is much greater than that, especially as you apply what we call cognitive services or sort of an aggregate artificial intelligence. We’re just at the beginning of what can be possible there.”

“Wouldn’t it be neat if a doctor in an encounter with a patient, there were a bot in the background listening to that conversation and transcribing and putting the notes into the EHR,” Bateman said. “We know that that’s one of the things that doctors struggle with quite a bit,” transitioning back and forth from data input to conversing with a patient.

Oracle’s Alexandra Ehrlich keyed in on the ability to provide more benefit with the bounty of data now at the disposal of medical providers by using cloud and advanced technologies.

To Gfrerer, VA’s modernization and digital transformation are centered on one thing: better service for the veteran. It’s “about adopting a business framework that revolves around customer-driven requirements.” And in his short tenure with the VA, he’s developed no doubts about the department’s commitment to that mission.

“I don’t ever have to wonder when I’m dealing with each of the three administrations … if they’re focused on the veteran’s needs and the veteran’s requirements — they certainly are,” he said.

Gfrerer’s progress will be closely watched by lawmakers on Capitol Hill who have a keen interest in improving VA’s digital services for veterans. Over the past decade, the department has struggled to develop a consistent IT enterprise to support its mission, most notably in its persistent struggle to provide an EHR that is interoperable with the Department of Defense health systems. To keep a close watch on that project and other VA modernization efforts, the House Veterans’ Affairs Committee last year launched the Subcommittee on Technology Modernization to focus exclusively on digital modernization efforts at the VA.

Last week, the House committee questioned VA’s progress to develop a tool to help give veterans better access to non-VA community care. Gfrerer testified with other VA leaders that the tool will be ready for launch by the June deadline, despite an independent report that expressed doubt. 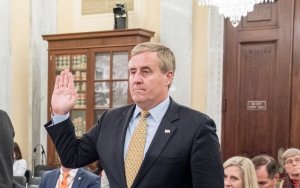