After nearly a decade on the job, U.S. Patent and Trademark Office CIO John Owens is retiring from the agency.

Owens officially announced his departure to his staff Tuesday, and an agency spokesperson confirmed the news to FedScoop. But there were indications that this was coming — in a recent interview Owens hedged his answer when asked whether he planned to leave USPTO. “I’m not going to say,” he said at the time, before talking about how much he enjoys new challenges. “We’ll see.”

During his tenure, Owens introduced agile development and DevOps methodologies to the agency, encouraged the release of open data and worked to shut off legacy patent systems, systems that are on pace to be phased out by 2020. He’s also spoken about the importance of embracing failure.

“Any CIO who tells you that they don’t have a failed project is probably not challenging themselves,” he told FedScoop.

The agency has not yet made any announcement about who will fill the role as interim CIO once Owens leaves on Nov. 3, the spokesperson told FedScoop. Federal News Radio first reported the news. 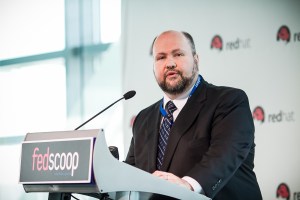