While federal officials in charge of the plan spent the day championing its early successes, particularly those tied to IT modernization, they also emphasized how important the next few years are to sustaining longer-term transformation — that any achievements in this first year won’t be as meaningful if they’re not scaled across government.

Thus, the next chapter of the PMA: “For this to actually matter, it has to translate throughout the country, it has to take root,” Margaret Weichert, deputy director of management for the Office of Management and Budget, explained Wednesday. “We actually need to really make progress. We need to move beyond talk into action.”

Anchored by elements of IT modernization, data and the workforce, the PMA “serves both as a frame and a focus” for the future of the federal government, U.S. CIO Suzette Kent said on a panel with Weichert and Emily Murphy, head of the General Services Administration, hosted by the National Academy of Public Administration. And the plan “continues to paint the roadmap forward,” Kent said.

Year one of the PMA was focused on “updating all the policy and getting some of the barriers to using modern available commercial technology and industry best practices out of the way and ensure that agencies had an open course to move forward as quickly as possible,” she said.

Kent and her fellow panelists referenced a slew of new IT-driven initiatives and policies like the IT Centers of Excellence, governmentwide agency adoption of Continuous Diagnostics and Mitigation, the adoption of cloud email, the Cloud Smart policy, the launch of the Cyber Reskilling Academy, and others included as part of the PMA’s cross-agency priority goals.

So far, “the frame and focus of the President’s Management Agenda let us hone in on particularly those systems who hadn’t been updated in a decade or two,” Kent said, adding that the “real indication is the improvement of citizen services that have been achieved.”

But what the administration is dealing with in the PMA is a lot more than modernizing systems — it’s about technology transformation, and there are opportunities, Kent said, “to take some giant leaps. And to take those giant leaps means we have to look at the technology and the data and the people at the same time.”

Over the next five years, Weichert said one major challenge to scaling initial progress is finding a way to fund technology long-term when the appropriations process comes up short or takes too long, as it tends to do.

“IT modernization is something that everyone knows is important, the technologies are old, we all know that,” she said. “But how do we get money to actually modernize those? How do we implement IT projects that take more than one year? The matching of the IT funding with actual IT needs led us to look at things like the Technology Modernization Fund, the Centers of Excellence … looking at how do we connect the dots around funding and the way technology projects actually work, which don’t fit neatly into one-year appropriation cycles and actually need more flexibility.”

Speaking to reporters after the panel, Kent and Weichert pointed to TMF’s working capital funds and the administration’s GEAR Center as opportunities to fund agency tech programs at the necessary pace.

“But the real scalability has to be agency by agency and how they use their own money. That’s a flywheel, potentially, if it works right.” Weichert said. Like with the working capital funds and how private sector firms fuel innovation through pilots and recycled savings, “the recovery mechanism that can self-fund innovation is really the heart of what we’re looking for… Effectively that’s what we’re looking to unleash here.”

“We do need to figure out how to get money to the priorities of the 21st century,” she said.

Reskilling and automating the workforce

With every point Kent and Weichert made, they tied it back to the workforce — without the right people with the right skills, none of this transformation will be successful.

“As we look at the modernization activities, what we also realized is that side by side it is imperative that we ensure the investment in the right skills for our workforce are present,” Kent said. “I talked about changing the policy, but some of those barriers were that we needed the skill sets inside the agencies to sustain those new technologies as we roll them out.”

But the government workforce, already short of the IT skills it needs, is shrinking, particularly as baby boomers retire en masse. With that, there’s an opportunity to use automation to supplement — not replace — lost workers.

“If people want to be here working in government, our goal is not to eliminate those people, and in fact, there are many missions in which I need more people — cybersecurity being only one of them, deep IT technical skills,” Weichert said. “I need the data expert, the actual database administrators to be feds. Yet I know I have to deliver a mission without that same population that the baby boom represents.”

Kent said the”broad-scale use of automated technologies should be something that is standard and common in all agencies, not an experiment, not something that we’re looking at in small pockets” in coming years.

Another tool the administration hopes will balance this loss of mid-to-senior level professionals is reskilling — training employees with basic skills to work on higher quality mission-oriented work, rather than the basic tasks that software bots can perform. Kent’s team launched the Cyber Reskilling Academy late last year to help guide federal employees whose jobs don’t relate to IT, at least in this first cohort, through basic cybersecurity training.

So, with people freed up from basic tasks, reskilling gives the government a huge opportunity to repurpose them around high-tech jobs.

“The things we’re doing with reskilling, and very specific programs looking at how do we get talented, excited individuals who are passionate about mission into the government? How do we keep them in roles? How do we give them mobility inside the government? And particularly in the technology area, how do we ensure that we’re growing them along their career path?” Kent said.

These early reskilling activities, she said, “are teaching us to use the muscles to leverage the capabilities we already have in the federal workforce and augment them with those new things that we need.” 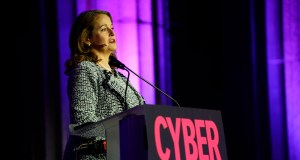 What’s next for the IT-heavy President’s Management Agenda?