The Transportation Security Administration wants a better sense of the airport security marketplace and is seeking proposals addressing problems with screening among other areas.

The agency intends to use its “convening authority” to advance the development of technologies it’s interested in seeing airports deploy, said Patty Cogswell, acting deputy administrator of TSA.

“We are going through a series of innovation efforts to understand — not just in the security space — who’s looking at things that might go to some of these problem sets,” Cogswell said at the Government Analytics Breakfast Forum on Wednesday.

The ITF will review proposals and select some for demonstration funding or more advanced work if a solution if far enough along, she added.

While behavioral analysis technology results “aren’t where you’d like them to be,” the agency is interested in using artificial intelligence to automate data-rich, repeatable tasks, she said.

“We look at a lot of X-ray imagery,” Cogswell said. “I really would like to get to the point where the vast majority of prohibited items are just automatically detected by the machine rather than the person.”

TSA agents could instead be trained to identify evidence that hasn’t made it into the algorithm yet.

First, the agency must do a better job of connecting its datasets, Cogswell said.

Cogswell also envisions AI being used to flag evidence in CCTV footage for law enforcement response, such as a suspicious package sitting on a platform unattended for too long, a person standing too close to train tracks, or a person entering a secured part of an airport.

TSA is brainstorming future states in which the passport check process is automated, Cogswell said.

While much of Europe, New Zealand and Australia are moving to ePassport gates, where a passport is placed in a machine that performs a facial match, Cogswell proposed a different scenario.

A person could check in for their flight on their phone, input their passport number and consent to the automated process. When they arrive at the airport they receive a screening appointment time, so they’re not waiting in line. As the person walks up to the screening checkpoint, a camera takes their picture, so by the time they’re standing in front of a screening officer their photos have been matched — no passport or boarding pass presentation necessary.

Travelers would be able to opt-out of the automated process and have their documents read instead. 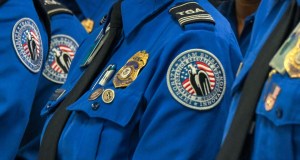