Department of Veterans Affairs Secretary Denis McDonough told lawmakers that he has concerns with the productivity of the department’s project to deliver a modernized electronic health record and that it could end up costing more than anticipated.

McDonough’s fears come from the VA’s struggles at a Pacific Northwest VA medical center that was the first across the department to roll out the new EHR. The medical center’s issues lie in how it is delivering care after clinicians and other medical staff are trained on the new cloud-based EHR system, the secretary said during a House hearing last week.

McDonough, new to the VA secretary role, recently issued a statement saying he would review the system and its rollout at the Mann-Grandstaff Medical Center in Spokane, Washington.

“At the end of the day, this is about service provision and outcome for [veterans],” he told the House Committee on Veterans’ Affairs in his first testimony as secretary. “That’s got to be what drives this.”

The program is designed to migrate billions of VA medical records to a Cerner-built cloud and deliver all-new EHR interfaces for medical workers to replace the legacy Veterans Health Information Systems and Technology Architecture. The system will eventually link into the Department of Defense’s Military Health System GENESIS modernization program to achieve interoperability between the two agencies to ease the transition for retiring service members.

McDonough said he’s also concerned by the department’s rate of spending on the modernization project, the number of people required to deploy the system and the scope of what contractor Cerner is being asked to do on the 10-year, $16 billion contract.

The VA’s plan for spending on the EHR is that it will be “front-loaded” and peak this year — but McDonough said he has concerns that the overall program will end up costing more than anticipated as more people will likely be required at deployment.

“It does appear to be requiring a lot more people on the target in Spokane,” he said.

McDonough’s recent attention on the EHR comes after lawmakers and other watchdogs raised issues with the program. In February, the Government Accountability Office recommended VA pause the project’s rollout while systems are tested to ensure they do not fail. And earlier this month, Rep. Cathy McMorris Rodgers, R-Wash., penned a letter detailing veterans from her district who experienced “dangerous” delays in medical care after the rollout.

McDonough’s early disappointments may be assuaged in the coming weeks as the strategic review gets underway. He showed openness to keeping much of the program the same but possibly tweaking some of the schedule and plans for the rollout.

“I don’t think that we fundamentally change the program in Spokane,” he said when asked what the outcome could be.

While on the topic of digital modernization, McDonough also told lawmakers during the hearing that the VA plans to increase its reliance on timely data and build out a data strategy to support new efforts.

“We will rely on data more heavily in the future than we ever have before,” he said.

The VA has some artificial intelligence-based projects underway that heavily rely on data, like one to identify veterans who might be at risk for suicide. McDonough told lawmakers he wants to increase the timeliness of suicide data, which currently lags two years behind. 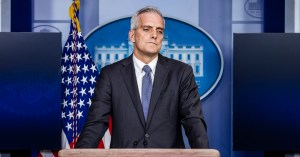