Blackburn spoke Monday at the GITEC Summit, a little less than a week after he resigned from the CIO spot and almost a month after the Trump administration fired VA Secretary David Shulkin.

“My understanding is that the plan is still to move forward,” he said. “Myself leaving, or Secretary Shulkin leaving, should not have much impact on that.”

Shulkin first proposed to adopt the Cerner EHR system — the same program that the Department of Defense is currently piloting — back in June 2017, but he was still negotiating the projected 10-year, $16 billion contract at the time of his firing.

Blackburn, who had been serving as acting CIO since September 2017, was one of the leaders overseeing the EHR modernization efforts and said the contract was nearly done.

“I think when Secretary Shulkin left, you have to give the new folks — whether its acting Secretary [Robert] Wilkie or hopefully soon-to-be Secretary [Ronny] Jackson — a little bit of time to understand what they are signing,” he said. “But the majority of the team is still in place. They’ve done a fantastic job. It’s basically at the goal line, and I think that folks are taking a little bit of as pause to understand and make sure it’s set up for success.”

How long that pause may be is unknown, as the Senate confirmation hearing for VA nominee Jackson, a rear admiral and current physician to the president, was indefinitely postponed Tuesday following concerns about his ability to lead the agency.

He joked about his departure with a light quip to illustrate the challenge of communicating with customers online.

“Twitter has changed the way we communicate,” he said. “Heck, even last week I said, ‘If the president can fire my boss on Twitter, I can quit on it.’ It wasn’t at all what I intended to do, but I thought, hey, this is the most effective means of communicating to all of my friends. I wasn’t expecting it to go viral.”

He said despite his departure, the VA will still be moving forward with its efforts to embrace open application programming interfaces from developers, as well as an anticipated consolidation of VA.gov and Vets.gov websites.

“I think part of the changeover in government is natural. People come in and out of government at all times. It truly is a relay race. I wish there was more continuity,” he said. “We make it very difficult in government, given how long the lead times are, to get things done sometimes and then the rapid turnover. But things were still moving forward at least to the best of my knowledge. I look forward to seeing that contract signed in a couple months.” 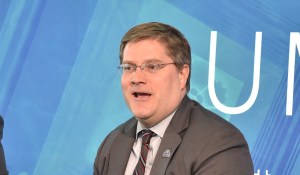